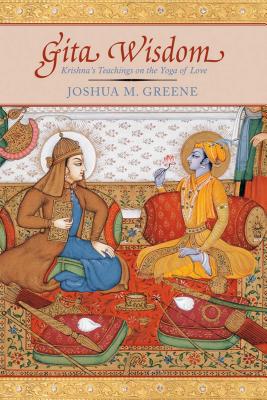 Joshua M. Greene has taken one of the most venerable and revered texts of all times -The Bhagavad Gita, and presents it in a completely new way. Greene reveals that the GIta, which can easily be obtuse to the modern reader, is really a simple conversation between two friends about the meaning of life. This fresh new view helps the 21st century seeker relate to the Gita and offers new ways of understanding this essential wisdom. The Gita is a discussion between Krishna and his devoted friend Arjuna on a battlefield known as Kurukshetra, a sprawling tract of land two hours north of Delhi, India. Scriptural calculations put the date of this famous discussion at around 3000 BCE. Like all great literature the Gita explores the human condition: who we are, where we come from, and why we are here. And as with all great literature, the more we study the main characters the more real and human they become. From related works we learn that Krishna and Arjuna played together as children. They were close friends in youth and became family when Arjuna married Krishna’s sister. We learn that later in life they shared extraordinary adventures, including a journey through subtle pathways to places outside the known universe. Plainly put, India’s most revered scripture is a heart-to-heart talk between two men who were closer than brothers and were the best of friends. Above all, The Sacred Conversation is practical and features a very helpful glossary in the back for terms, names, and places. Whether you are an expert on The Bhagavad Gita or a first-time reader, this unique contribtion to spiritual literature offers deep knowledge in a highly accessible way.

Joshua M. Greene has produced films for PBS and Disney, has served as vice president for New York’s largest PR firm, and was appointed director of strategic planning for the United Nations Peace Summit of Religious and Spiritual Leaders. He was also an adjunct professor at Hofstra University in New York. His previous works include the best-selling Here Comes the Sun: The Spiritual and Musical Journey of George Harrison; Justice at Dachau: The Trials of an American Prosecutor;Witness: Voices from the Holocaust; and Gita Wisdom: An Introduction to India’s Essential Yoga Text. In 1970, he was initiated as Yogesvara Das by Bhakivedanta Swami Prabhupada and served for thirteen years in Prabhupada’s society as director of French-language publications.
Loading...
or
Not Currently Available for Direct Purchase