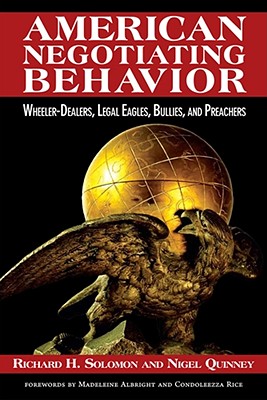 This landmark study offers a rich and detailed portrait of the negotiating practices of American officials. It assesses the multiple influences cultural, institutional, historical, and political that shape how American policymakers and diplomats approach negotiations with foreign counterparts and highlights behavioral patterns that transcend the actions of individual negotiators and administrations.Informed by discussions and interviews with more than fifty seasoned foreign and American negotiators, Richard H. Solomon and Nigel Quinney argue that four distinctive mind-sets have combined to shape U.S. negotiating practice: a businessperson's pragmatic quest for concrete results, a lawyer's attention to detail, a superpower's inclination to dictate terms, and a moralizer's sense of mission. The authors examine how Americans employ time, language, enticements, and pressure tactics at the negotiating table, and how they use (or neglect) the media, back channel communications, and hospitality outside the formal negotiating arena. They also explore the intense interagency rivalries and congressional second-guessing that limit U.S. negotiators freedom to maneuver.A chapter by the eminent historian Robert Schulzinger charts the evolving relationship between U.S. presidents and their negotiators, and the volume presents a set of eight remarkably candid foreign perspectives on particular aspects of American negotiating behavior. These chapters are written by a distinguished cast of ambassadors and foreign ministers, some from countries allied to the United States, others from rivals or adversaries and all with illuminating stories to tell.In the concluding chapter, Solomon and Quinney propose a variety of measures to enhance America's negotiating capacities to deal with the new and emerging challenges to effective diplomacy in the 21st century.Contributors: Gilles Andreani Chan Heng Chee David Hannay Faruk Logoglu Lalit Mansingh Yuri Nazarkin Robert Schulzinger Koji Watanabe John Wood.