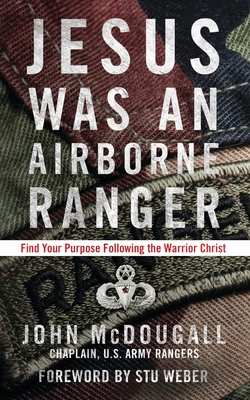 Jesus Was an Airborne Ranger (Paperback)

The Raid that Rescued Us.  The Mission that Defines Our Lives.

You are trapped behind enemy lines. You feel it every day. Powerful forces want to destroy you and those you love. Completely surrounded, you see no means to escape.

Sadly, the Jesus we often picture is too timid to help—more like a daytime talk show host than a dangerous Rescuer.

Who would follow—much less risk everything—for such a leader?

Get ready to see Jesus like you’ve never seen him before—a battle-scarred Combatant who stared death in the face and won. This is no Sunday-school Jesus, meek and mild. This is the Warrior Christ who has descended from the heavens, defeated the Enemy, and rescued humanity. Now, he calls us to continue his mission and fight for others—our families, our communities, and the world.

In Jesus Was an Airborne Ranger, Army Chaplain John McDougall offers an alternative to the soft, gentle caricature of Jesus. Only the Warrior Christ can impact our broken world. And only in following him can you find the life of purpose you’ve always wanted.

SUIT UP. It’s time to enter the fight with the first and greatest Airborne Ranger.

The views expressed in this book are those of the author and do not reflect the official policy or position of the U.S. Army, the Department of Defense or the U.S. government.

John McDougall is a US Army Chaplain and a veteran of both Iraq and Afghanistan. A West Point graduate, he has served over 10 years in Airborne and Ranger assignments including the 173rd Airborne Brigade, the 82nd Airborne Division and the 75th Ranger Regiment. John has a Masters of Divinity from Multnomah Biblical Seminary.  He is stationed at Joint Base Lewis-Mchord, Washington, with his wife Bree and their three children.

The views expressed in this book are those of the author and do not reflect the official policy or position of the U.S. Army, the Department of Defense or the U.S. government.
or
Buy Here
Copyright © 2020 American Booksellers Association