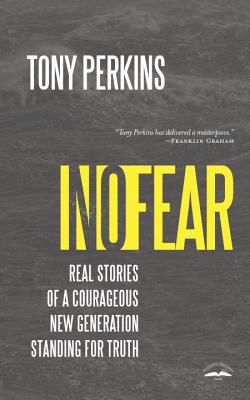 Real Stories of a Courageous New Generation Standing for Truth

This book heralds a new generation of Christians who are more than bold…they are fearless!

No Fear draws you inside the stories of young, ordinary believers who, despite incredible opposition, courageously stand up for God’s truth. Tony Perkins pairs each story with a biblical example and gives practical ideas for building a “no fear” perspective every day.

Today, followers of Jesus Christ face more opposition to their beliefs than any generation in American history. Yet even in such a hostile cultural and political environment, it is an exciting time to stand firm in the faith.

You have been chosen to live in this important hour, and reading these stories will inspire you to the same kind of courage.  So what are you waiting for?

“Tony Perkins has discovered a new generation of young people who love following God more than the crowd...You will discover there is still hope for America and the world after reading their stories in No Fear!”
—Todd Starnes, Fox News Channel

“As the world continues to spiral into an anti-Christian age, it’s important to empower our young people with the strength and conviction to hold fast to the teachings of Christ, and No Fear does just that.”
—Dr. Jack Graham, Senior Pastor, Prestonwood Baptist Church

Includes discussion questions after each chapter.

Join the conversation on social media with #nofearbook


Making a Difference Starts with Standing Up for What’s Right

A fourteen-year-old girl testifies before the Maryland State Senate in support of the traditional family. A young man and his new wife launch a campaign to decrease abortions in their community. A high-school cheerleader goes to court for the right to put Bible verses on banners at football games.

These young Americans know that honoring God and his Word is more important than winning friends or keeping their jobs.

In No Fear, Tony Perkins tells the stories of young Christians who take a stand for truth in the face of intense opposition. These unlikely heroes will show you the dramatic influence one person can have in calling a nation to seek fairness, justice, and compassion. The book also draws you back to the heroes of the Bible who stood up for God in their own day and culture, modeling the same brand of courage that is needed today.

What would you do for God if you had no fear? The possibilities are endless. It’s time to get started!

Tony Perkins is president of the Family Research Council in Washington, DC. He is a former member of the Louisiana State Legislature and was a Republican candidate for the United States Senate in 2002. Perkins hosts a daily, nationally syndicated radio program called Washington Watch with Tony Perkins. He also serves as the president of the Council for National Policy, an organization of the nation’s leading conservative policy and business entrepreneurs. A veteran of the U.S. Marine Corps, a former police officer, and a former television news reporter, Perkins brings a unique blend of experience and leadership to the pro-family movement. He earned his undergraduate degree from Liberty University and a master’s degree in public administration from Louisiana State University.

Praise For No Fear: Real Stories of a Courageous New Generation Standing for Truth…

“Tony Perkins has delivered a masterpiece. We as Christians are constantly being bombarded with hostility and claims that we are ‘bigots’ or ‘hateful.’ The future of the church is in the hands of young people today, and Tony Perkins delivers stories of young men and women standing up for their faith, for their beliefs, and for what the Bible says is right. This is no time for Christians to be silent, and Tony Perkins is using No Fear to help raise up a new generation of world changers.”
—Franklin Graham, president and CEO of the Billy Graham Evangelistic Association and Samaritan’s Purse

“This book is good news for America! Tony Perkins has discovered a new generation of young people who love following God more than the crowd. They are remarkable, brave, and fun. You will discover there is still hope for America and the world after reading their stories in No Fear!”
—Todd Starnes, Fox News Channel

“Tony Perkins offers strong, respectable role models for young Christians to emulate as they enter into the world of adulthood. In his book No Fear, using a biblical foundation, Perkins tells the stories of young individuals who stand strong in their faith and convictions, despite facing adversity. As the world continues to spiral into an anti-Christian age, it’s important to empower our young people with the strength and conviction to hold fast to the teachings of Christ, and No Fear does just that.”
—Dr. Jack Graham, senior pastor of Prestonwood Baptist Church

Tony Perkins’ No Fear is an amazing book that shows what young men and women are capable of when they unashamedly stand up for their faith and refuse to back down in the face of adversity. No Fear shows the importance of such courage in today’s world. This is a must read book that will inspire a courageous heart in tomorrow’s movers and shakers.
—Dana Loesch, Nationally syndicated radio host, author, host BlazeTV
or
Not Currently Available for Direct Purchase
Copyright © 2020 American Booksellers Association