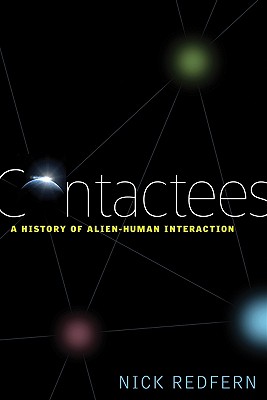 A History of Alien-Human Interaction

We are not alone…and Nick Redfern can prove it. Contactees contains the fascinating stories of the select group of people chosen by visitors to Earth to spread their message. Are aliens really among us? don't be too quick to dismiss their claims. Truman Bethurum was divorced by his wife because she believed he was having close encounters of a very personal kind with a beautiful extraterrestrial "space captain" named Aura Rhanes? Is he nuts? Prescient? An omen? A band of eerily human-looking, blond-haired aliens--later known as the Space-Brothers--informed other contactees that they were concerned by our warlike ways and wished us to live in peace with one another. Acting on the advice of the Space-Brothers, contactees such as George Van Tassel and George Adamski went out and spread the extraterrestrial word to anyone and everyone who would listen. And many did, including U.S. government agencies. More than half a century later, the contactees are still amongst us, still telling their tales of personal alien encounters, and still maintaining their cult-like status in the world of UFOlogy. Nick Redfern's Contactees relates their controversial, illuminating, bizarre, and thought-provoking stories in all their appropriately out-of-this-world glory.

Nick Redfern is the author of more than thirty books on UFOs, Bigfoot, and cryptozoology, including Monster Files, Memoirs of a Monster Hunter, and The Real Men in Black. He has appeared on more than seventy television shows, including the SyFy Channel's Proof Positive, the History Channel's Ancient Aliens, and MSNBC's Countdown with Keith Olbermann.
Loading...
or
Not Currently Available for Direct Purchase