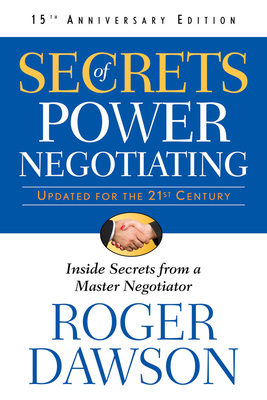 Inside Secrets from a Master Negotiator

Roger Dawson's Secrets of Power Negotiating has changed the way American business thinks about negotiating. Thinking "win-win"--looking for that magical third solution in which everyone wins but nobody loses--can be a naive and ultimately unsuccessful approach in today's tough business environment. Power Negotiating teaches that the way you negotiate can get you everything you want and still convince the other side that they won also.

This third edition has been completely revised and updated to reflect the changing dynamics of business today. New and expanded sections include: Secrets of Power Negotiating covers every aspect of the negotiating process with practical, proven advice, from beginning steps to critical final moves: how to recognize unethical tactics, key principles of the Power Negotiating strategy, why money is not as important as everyone thinks, negotiating pressure points, understanding the other party and gaining the upper hand, and analyses of different negotiating styles.


Praise For Secrets of Power Negotiating,15th Anniversary Edition: Inside Secrets from a Master Negotiator…

"I can't believe it! Here's a book that is packed with wisdom that will help anyone improve their life and yet it is easy and fun to read! Amazing!" --Og Mandino, author of The Greatest Salesman in the World
— Og Mandino

"A fast, entertaining read that should be required reading for anyone who deals with people. Highly recommended." --Ken Blanchard, coauthor of The One Minute Manager
— Ken Blanchard

"Roger Dawson's great book will help you create and expand one of the most critical skills to life-long success." --Anthony Robbins, author of Unlimited Power and Awaken the Giant Within
— Anthony Robbins

Roger Dawson (La Habra Heights, CA) is one of the country's top experts on the art of negotiating. As a full-time speaker since 1982, he has trained executives, managers, and salespeople throughout the U.S., Canada, Asia and Australia. He is one of only a few professionals in the world to have been awarded both the CSP and CPAE by the National Speakers Association, their two highest awards. He was inducted into the Speakers Hall of Fame in 1991. He is the author of Secrets of Power Negotiating, Secrets of Power Negotiating for Salespeople, and Secrets of Power Persuasion (all Career Press).