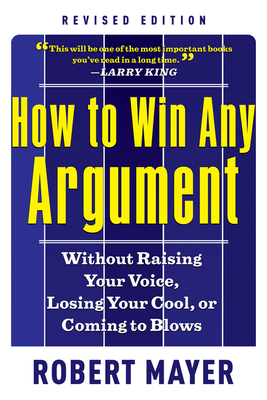 How to Win Any Argument, Revised Edition

Without Raising Your Voice, Losing Your Cool, or Coming to Blows

The art of the argument. It's mysterious and powerful. It's the art of having things go your way. But it's also the art of getting out of your own way. It's having the Moves. But it's also about having the Touch. Welcome to the "new normal." It's a time and place where conversations are tougher, disagreements more frequent, consensus more difficult to find than ever before. This new world demands three new "right for our times" chapters:


Praise For How to Win Any Argument, Revised Edition: Without Raising Your Voice, Losing Your Cool, or Coming to Blows…

"This will be one of the most important books you've read in a long time."
--Larry King

"[Mayer's methodology] is martial. It's mental judo, where you use the other guy's energy to win. It's mind-set. It's charisma."
--The New York Times

"Two thumbs up! A whole new way of being smart about all the people in your life--coworkers, bosses, family, the people you do business with. Bob Mayer tells you how to finesse the results you want without pleading, prodding, pushing, or pulling."
--Cuba Gooding, Jr., Academy Award-winning actor

"A tender and effective approach to tough problems. Mayer has written more than a book, it's a way of life."

"Anybody can learn these methods, which range from recommendations to stay calm to suggestions on shaping your message. All are useful and presented in clear principles and vivid illustrations."
--Rolf Dobelli getabstract.com

Robert Mayer conducts negotiation, mediation, and persuasion seminars and workshops both here and abroad, most recently in Dubai. He has appeared in more than 150 radio and television shows, including Weekend Today In New York. Mayer received both his business and law degrees from UC-Berkeley. He and his firm represent clients both big and small, negotiating deals on everything from amphitheater developments to the sale of Zero vintage aircraft. He lives in Los Angeles, California.