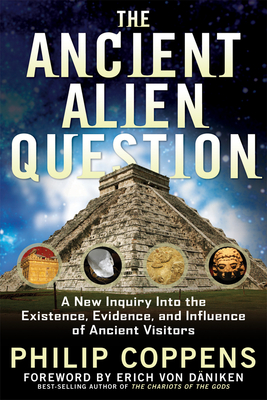 A New Inquiry Into the Existence, Evidence, and Influence of Ancient Visitors

Have we been visited by extraterrestrial beings?

Did these "ancient aliens" contribute to the birth of human civilization?

Do our ancient monuments contain evidence of their presence?

The Ancient Alien Question reveals an array of astonishing truths, including:


Praise For The Ancient Alien Question: A New Inquiry Into the Existence, Evidence, and Influence of Ancient Visitors…

"…an important and outstanding contribution."
--Erich von Daniken, best-selling author of Twilight of the Gods

"The Ancient Alien Question provides a captivating adventure around the world and sheds an interesting perspective on the Ancient Astronaut Theory. It raises questions that culminate in well-thought-out, and sometimes downright startling, conclusions. A must-read for anyone who wants to expand their knowledge horizon in this kick-ass field."
--Giorgio A. Tsoukalos, author, Gods or Ancient Aliens? producer, Ancient Aliens: The Series

"In The Ancient Alien Question Coppens breaks the intellectual sound barrier and offers his readers a well-researched and well-written book that challenges this last taboo of the human adventure. Definitely a not-to-be-missed book!"
--Robert Bauval, author of The Orion Mystery

"Philip Coppens covers all the bases on this controversial topic. His research is thorough and he addresses each topic with a balanced overview that cuts through the jungle of confusion with a very sharp machete of reason."
--David Hatcher Childress, author of Technology of the Gods

Philip Coppens (1971–2012) was an internationally renowned investigative journalist and author. He was labeled a skeptic by the believers and a believer by the skeptics, a unique position that made him a well-recognized voice of reason. He is the author of 8 books, including the bestselling The Lost Civilization Enigma, and was one of the original and leading contributors to the History channel’s popular series Ancient Aliens.

von Däniken is arguably the most widely read and most copied nonfiction author in the world. He published his first (and best known) book, Chariots of the Gods, in 1968. The worldwide bestseller was followed by 40 more books, including the recent bestsellers The Gods Never Left Us, Eyewitness to the Gods, Twilight of the Gods, History Is Wrong, Evidence of the Gods, Remnants of the Gods, and Odyssey of the Gods. His works have been translated into 28 languages and have sold more than 65 million copies. Several have also been made into films.

Von Däniken's ideas have been the inspiration for a wide range of television series, including the History channel's hit Ancient Aliens. His research organization, the A.A.S.R.A./legendarytimes.com (Archaeology, Astronautics & SETI Research Association), comprises laymen and academics from all walks of life. Internationally, there are about 10,000. members. He lives in Switzerland but is an ever-present figure on the international lecture circuit, traveling more than 100,000 miles a year.