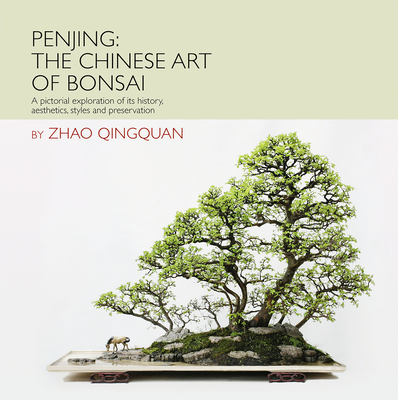 The Chinese Art of Bonsai: A Pictorial Exploration of Its History, Aesthetics, Styles and Preservation

With hundreds of color photographs and illustrations, this Chinese gardening book is a wonderful introduction to penjing--China's treasured bonsai art. Although most people thing bonsai is a Japanese invention, the art originated in ancient China where it is called penjing. The two Chinese characters for penjing ("pot" and "landscape") capture the essence of this art: sculpting microcosms of the beauty of the natural world from plants, rocks, soil, and water, both as an artistic process and as horticultural cultivation. Both penjing and bonsai are art forms that express the beauty of nature. In China, bonsai, as a part of penjing, is often called "tree penjing," or "tree in a pot." The Chinese divide penjing into three categories: tree penjing, rock penjing, and water-and-land penjing. This Chinese gardening book showcases the Chinese art of penjing in all its aspects for the benefit of penjing aficionados and all other readers interested in Chinese culture. It covers the concept, history, categories, aesthetic features, techniques, display, appreciation, and preservation of penjing. It is a feast for the eyes while providing a wealth of information for the academically inclined as well as the practically minded. There are more than 300 lavish illustrations grouped into three different categories of penjing. The reader will not only be awed by the beautiful compositions of penjing, but will also learn about the Chinese approach to nature and to life.

Zhao Qingquan (1949-), a native of Yangzhou, Jiangsu Province, is a master of the Chinese art of penjing, a Senior Landscape Engineer, an International Bonsai Instructor at Bonsai Clubs International, and an International Consultant for the World Bonsai Friendship Federation. He is currently on the staff of the Penjing Museum of the Slender West Lake Garden. Zhao's passion for penjing began early under the influence of his family. He later received training under Professor Xu Xiaobai, a renowned expert on penjing. In his four-decade-long career creating and studying penjing, Zhao Qingquan focused on the fusion of traditional Chinese culture and contemporary aesthetic sensibilities. In the 1970s, he pioneered a new form of penjing--the water-and-land penjing, by grouping such design elements as plants, rocks and water, in a merge of traditional tree penjing and rock penjing. Its unique aesthetic style is reminiscent of classic Chinese literati paintings. An internationally acclaimed penjing master, Zhao has attended world penjing conferences several times and given Chinese penjing lectures and demonstrations in the United States, Canada, France, Italy, Spain, Australia, Venezuela, Puerto Rico, India, Malaysia and Indonesia. In 2001, his penjing Trident Maples was added to the collection of the National Bonsai and Penjing Museum of the US National Arboretum. In 2009, he received the Promoting Bonsai Throughout the World Award at the World Bonsai Convention in Puerto Rico. Zhao's more than ten monographs include An Analysis of the Art of Composition of Chinese Penjing, Penjing: Worlds of Wonderment (in English), and Zhao Qingquan's Penjing Art.
or support indie stores by buying on
Copyright © 2020 American Booksellers Association