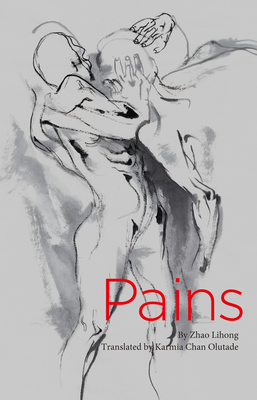 Pains is renowned writer, publisher and editor Zhao Lihong's newest collection of Chinese poetry in translation--a thematically interlinked meditation on the human body, aging, and the complexities of freedom. In this collection of fifty-one poems, Zhao pulls in his focus and examines the universal in constrained microcosmic units of abstraction. The poet utilizes his decades of influence to pull ahead as a preeminent representative of contemporary Chinese poetry in all of its simplicity, and proves that limitation in itself may be a blessing. Sample poetry from Pains: When did it happen:
black becoming white?
White as smoke ash, white as surviving snow,
white and rough and vacuous
as a sigh that cuts through a glacier. Those silken threads
are still atop my head
thinning by the day.
When the wind blows, it still levitates.
The wind says, your earth still lives,
my breath cannot break you.

Zhao Lihong, born in Shanghai in 1952, is the director of the China Writers Association, vice-president of the Shanghai Writers Association, the publisher of the monthly Shanghai Literature, editor-in-chief of Shanghai Poets, a bimonthly journal and a guest professor in modern literature and creative writing. He also teaches at Shanghai Jiaotong University. Zhao has published more than 70 works in poetry, prose and report literature, and his works have been translated into English, French, Russian, Japanese, Korean, Ukrainian, Bulgarian, and Serbian. He was awarded the Smederevo Golden Key in Serbia at the 44th Smederevo Poets' Autumn Festival in October 2013. In 2014, Zhao received the Outstanding Contribution to Shanghai Culture & Arts Award issued by the Shanghai government. He currently resides in Shanghai.
Loading...
or
Not Currently Available for Direct Purchase