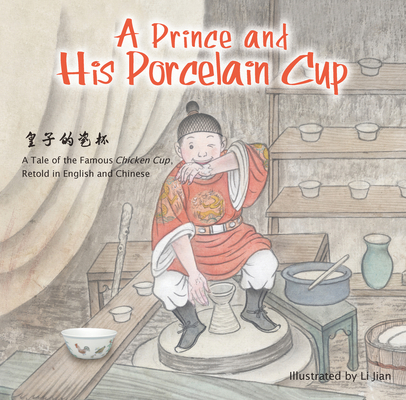 A Prince And His Porcelain Cup (Hardcover)

This beautifully illustrated, bilingual Chinese and English children's book invites you to learn a store inspired by the rare Ming Dynasty cup that's admired as the "holy grail" of China's art world. Known as the Chicken Cup, it's vividly decorated with a rooster and a hen tending to her chicks. This story tells the tale of a grieving young prince who has recently lost his parents. His uncle who becomes the Emperor decides to send him to the frontier. Upset by the news, the price accidentally smashes his mother's favorite cup...While the young prince is away he learns to appreciate the fine art of porcelain while recreating his mother's favorite cup. Porcelain evolved in China over 1200 years ago, and this book explains how it's made and its importance in Chinese history. Written in English and Chinese, this beautiful story follows the young emperor's journey from being ousted from the palace to his time in a ceramics workshop and to his victorious return to the palace as emperor. Find our years later how the prince creates a beautiful and flawless Chicken Cup when he returns to become Emperor. After admiring a famous painting of A Hen and Her Chicks, he designs a small porcelain cup with a rooster representing his brave father, a hen symbolizing his kind mother, and chicks that signified the young prince. This Ming Dynasty piece was recently sold at auction for an unprecedented $36 million in 2014. The Chinese words for chicken and lucky sounds like Ji which is why the chicken motif is thought to be a symbol of good luck and prosperity.