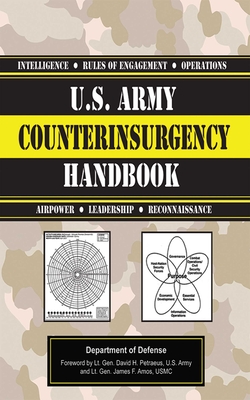 Anyone with an interest in what our troops are doing overseas will find this government manual an excellent source of information. It gives a detailed breakdown of what an insurgency is, how one starts and builds, and what our forces must do to overcome it. Find out the key roles often taken by insurgents; how to carry out intelligence, surveillance, and reconnaissance missions; and what ethical questions arise in handling these types of situations. Historical examples and anecdotes of both successes and failures provide an overall perspective. Dozens of illustrations and charts break down the information for civilians, and appendices cover legal issues, translation difficulties, airpower, and more.

Skyhorse Publishing is proud to publish a range of books for readers interested in military tactics and skills. We publish content provided by or of interest to the U.S. Army, Army Rangers, the U.S. Navy, Navy SEALs, the U.S. Air Force, the U.S. Marine Corps, and the Department of Defense. Our books cover topics such as survival, emergency medicine, weapons, guns, weapons systems, hand-to-hand combat, and more. While not every title we publish becomes a New York Times bestseller or a national bestseller, we are committed to publishing books on subjects that are sometimes overlooked by other publishers and to authors whose work might not otherwise find a home.

The United States Department of Defense (DOD or DoD) is the federal department charged with coordinating and supervising all agencies and functions of the government relating directly to national security and the military. The organization and functions of the DOD are set forth in Title 10 of the United States Code. The DOD is the major tenant of The Pentagon building near Washington, D.C., and has three major components – the Department of the Army, the Department of the Navy, and the Department of the Air Force. Among the many DOD agencies are the Missile Defense Agency, the Defense Advanced Research Projects Agency (DARPA), the Pentagon Force Protection Agency (PFPA), the Defense Intelligence Agency (DIA), the National Geospatial-Intelligence Agency (NGA), and the National Security Agency (NSA). The department also operates several joint service schools, including the National War College.
or
Not Currently Available for Direct Purchase
Copyright © 2020 American Booksellers Association