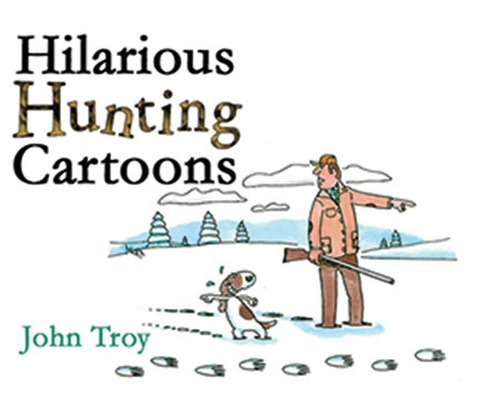 No one understands the challenges and frustrations of the outdoorsman's life like John Troy, and no one makes the maddening business of hunting so riotously funny. Anyone still kicking himself over a missed shot, anyone wishing that his hunting dog had paid more attention in obedience school, or anyone who has ever been confounded by the antics of a pesky squirrel will enjoy this hugely delightful collection. In typical John Troy style, we are treated to one-panel lampoons of shooters who can't hit stuffed animals, bears that beat up hunters, and ducks that make their own decoys. They're funny because they're true. Hilarious Hunting Cartoons will delight both novice and experienced hunters and will make an excellent gift for yourself or a passionate hunter you know.

John Troy's cartoons have appeared in Field & Stream, Sports Afield, Outdoor Life, Audubon, In-Fisherman, Ducks Unlimited Magazine, Fly Fisherman, and dozens of other outdoor publications. He was the creator of "Baxter," the beloved and mischievous hunting dog who was featured in several of his many bestselling cartoon collections. He was the author of Hilarious Fishing Cartoons and Hilarious Hunting Cartoons. John Troy grew up in New Jersey and lived with his wife, Doris, in Dade City, Florida. He is deceased.

Nick Lyons is a former English professor and book publisher, as well as the author and editor of many books on various topics. He lives in New York City.
Loading...
or
Not Currently Available for Direct Purchase