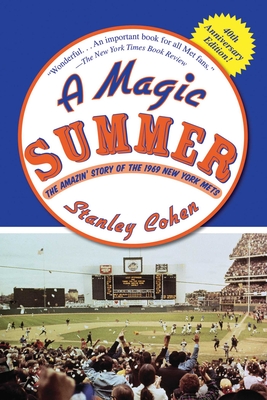 1969 was an amazing year for Mets fans, and for all of baseball. Just seven years after bumbling their way through one of the worst years in baseball history as an expansion team, the New York Mets became champions of the world.

Managed by Gil Hodgers, one of Brooklyn’s “Boys of Summer,” the Mets cleared every obstacle in their way, including a talented Cubs team and an Orioles team stacked with first class pitching.

A Magic Summer tells of that remarkable season by chronicling the major events as viewed twenty years later. Interviews conducted twenty years after with members of the team—provide immediacy and, with that, fascinating updates and insights. Relive the glory days of Tom Seaver and Jerry Koosman, of Ed Kranepool and Donn Clendenon, of Ron Swoboda and Tommie Agee.

This is a unique record and celebration of a season that Mets fans—and all baseball fans—will not soon forget.

Stanley Cohen is a veteran award-winning newspaper and magazine journalist. He has worked as an editor, writer, and reporter for newspapers, magazines, and an international news service for more than fifty years and has also taught writing, journalism, and philosophy at Hunter College. He is the author of ten books, including the acclaimed The Game They Played. He lives in Tomkins Cove, New York.
Loading...
or
Not Currently Available for Direct Purchase