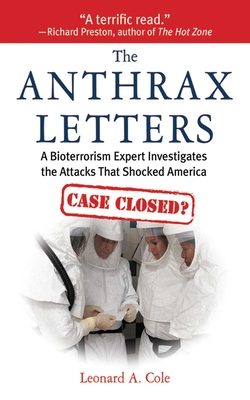 A Bioterrorism Expert Investigates the Attack That Shocked America

At 2:00am on October 2, 2001, Robert Stevens entered a hospital emergency room. Feverish, nauseated, and barely conscious, no one knew what was making him sick. Three days later he was dead. Stevens was the first fatal victim of bioterrorism in America.

Bioterrorism expert Leonard Cole has written the definitive account of the Anthrax attacks. Cole is the only person outside law enforcement to have interviewed every one of the surviving inhalation-anthrax victims, along with the relatives, friends, and associates of those who died, as well as the public health officials, scientists, researchers, hospital workers, and treating physicians. Fast paced and riveting, this minute-by-minute chronicle of the anthrax attacks recounts more than a history of recent current events, it uncovers the untold and perhaps even more important story of how scientists, doctors, and researchers perform life-saving work under intense pressure and public scrutiny. Updated with new information about Ivins and a series of upcoming Congressional hearings into the FBI’s conduct in this case, The Anthrax Letters amply demonstrates how vulnerable America was in 2001 and whether we are better prepared now for a bioterror attack.

Praise For The Anthrax Letters: A Bioterrorism Expert Investigates the Attack That Shocked America…

"[A] thoroughly researched, detailed, and fascinating book... a well-written forensic mystery..."—Journal of the American Medical Association

".Absolutely riveting. ... [Cole is] a superb writer and his book reads like a fine-tuned suspense novel."—DingBat Magazine

"Deliver[s] all the drama of a modern-day thriller... offers the most complete look available at the still-unsolved mystery"—Roll Call

"Excellent insights ... fascinating discussion of the attacks and how they will influence our level of preparedness for the future."—Library Journal

"Interesting and genuinely informative reading..."—Bulletin of the World Health Organization

"Offers us a wealth of detail on the case -- even as it reminds us how little we know."—James P. Pinkerton, Newsday

"One of the most authoritative of the recent crop of books on the anthrax letters...undeniably intriguing."—Washington Times, November 16, 2003

"Vivid portraits of the bacteria, those who were infected, and those whose job it was to counter the threat."—Kirkus Reviews

"An excellent job... Probably the most detailed book on the subject….This book is a must."—Counterterrorism Homeland Security Reports

"[Cole’s] storytelling abilities rank with those of Richard Preston, without ever losing sight of the science."—Lancet Journal of Infectious Diseases