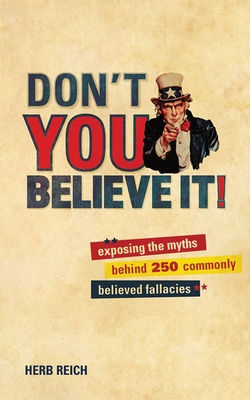 Don't You Believe It!

Our cherished culturally shared beliefs stem from a variety of sources, many of which propagate old wives’ tales, myths, self-serving fantasies, innocent fallacies, or sheer nonsense. History is replete with stories of great men and events that either never happened or didn’t happen the way we were told they did. Such items are part of our common knowledge. They are taught in schools. They are passed down to us by our families and friends and have become part of shared cultural knowledge, accepted without question. And they are wrong. Here, Herb Reich explodes 200 myths that you probably accept as fact, including:
It is a cliché that history is written by the victors. But Don’t You Believe It! will demonstrate that it is also written by teachers, by newsmen, by heirs, by hucksters, and occasionally by someone who has a lousy memory or an axe to grind.

Herb W. Reich is a man of many parts, some of which are frequently misplaced. When gainfully employed, he has served as a senior editor with John Wiley & Sons, editorial director of the Macmillan Book Clubs, and an invited contributor to several editions of The Random House Dictionary of the English Language and the Corsini Encyclopedia of Psychology. (Odd, but true!) He is also the author of Lies They Teach in School and Numberpedia.
Loading...
or
Not Currently Available for Direct Purchase