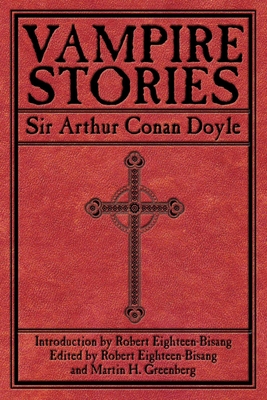 Who would suspect that the same mind that created the most famous literary detective of all time also took on the eternally popular genre of vampires? Sir Arthur Conan Doyle, a contemporary of Bram Stoker, gave us some fascinating works of vampire fiction. From the bloodsucking plant in “The American’s Tale” to the bloodsucking wife in “The Adventure of the Sussex Vampire,” he reveled in the horror created by creatures who survived on the blood of men and women.

As the bestselling Twilight series has dominated bookstores, it’s the perfect time to offer the first-ever compilation of Sir Arthur Conan Doyle’s vampire tales. Get ready to sink your teeth into this heart-stopping anthology. Each of these twelve short stories has been pulled from obscurity and hand selected for this collection. Conan Doyle’s famous friendship with vampire king Bram Stoker is thought to have influenced these many blood-sucking tales, including “The Captain of the Pole Star,” about a medical student on an arctic voyage haunted by a heat-draining Eskimo vampire and “The Three Gables,” in which vampirism is cunningly used as a metaphor for capitalism.

Featuring an introduction by world-renowned vampire expert, Robert Eighteen-Bisang, this is a must-have anthology for all vampire lovers, and for any Arthur Conan Doyle enthusiast.

Martin H. Greenberg has been called “the best anthologist since Ellery Queen.” He’s the most prolific anthologist in publishing history and recipient of the Ellery Queen Award for life achievement in editing from the Mystery Guild of America. He is also one of the editors of Vampire Stories by Sir Arthur Conan Doyle. He lives in Green Bay, Wisconsin.
Loading...
or
Not Currently Available for Direct Purchase