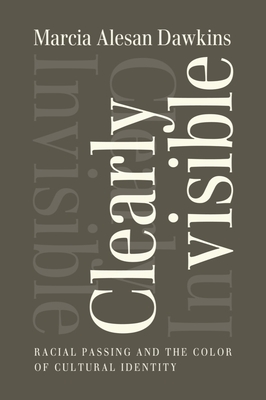 Racial Passing and the Color of Cultural Identity

Everybody passes. Not just racial minorities. As Marcia Dawkins explains, passing has been occurring for millennia, since intercultural and interracial contact began. And with this profound new study, she explores its old limits and new possibilities: from women passing as men and able-bodied persons passing as disabled to black classics professors passing as Jewish and white supremacists passing as white.

Clearly Invisible journeys to sometimes uncomfortable but unfailingly enlightening places as Dawkins retells the contemporary expressions and historical experiences of individuals called passers. Along the way these passers become people--people whose stories sound familiar but take subtle turns to reveal racial and other tensions lurking beneath the surface, people who ultimately expose as much about our culture and society as they conceal about themselves.

Both an updated take on the history of passing and a practical account of passing's effects on the rhetoric of multiracial identities, Clearly Invisible traces passing's legal, political, and literary manifestations, questioning whether passing can be a form of empowerment (even while implying secrecy) and suggesting that passing could be one of the first expressions of multiracial identity in the U.S. as it seeks its own social standing.

Certain to be hailed as a pioneering work in the study of race and culture, Clearly Invisible offers powerful testimony to the fact that individual identities are never fully self-determined--and that race is far more a matter of sociology than of biology.

Marcia Alesan Dawkins is a highly sought-after public speaker, media commentator, educator and award-winning author who has been part of noteworthy institutions such as Catalyst, Truthdig, The Minerva Project, USC and Brown University. She earned her Ph.D. in Communication from the University of Southern California's Annenberg School of Communication & Journalism.
Loading...
or support indie stores by buying on