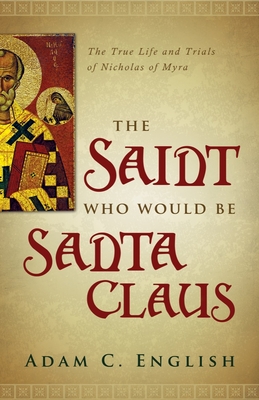 The Saint Who Would Be Santa Claus

The True Life and Trials of Nicholas of Myra

With his rosy cheeks and matching red suit--and ever-present elf and reindeer companions--Santa Claus may be the most identifiable of fantastical characters. But what do we really know of jolly old Saint Nicholas, patron saint of Christmastime? Ask about the human behind the suit, and the tale we know so well quickly fades into myth and folklore.

In The Saint Who Would Be Santa Claus, religious historian Adam English tells the true and compelling tale of Saint Nicholas, bishop of Myra. Around the fourth century in what is now Turkey, a boy of humble circumstance became a man revered for his many virtues. Chief among them was dealing generously with his possessions, once lifting an entire family out of poverty with a single--and secret--gift of gold, so legend tells. Yet he was much more than virtuous. As English reveals, Saint Nicholas was of integral influence in events that would significantly impact the history and development of the Christian church, including the Council of Nicaea, the destruction of the temple to Artemis in Myra, and a miraculous rescue of three falsely accused military officers. And Nicholas became the patron saint of children and sailors, merchants and thieves, as well as France, Russia, Greece, and myriad others.

Weaving together the best historical and archaeological evidence available with the folklore and legends handed down through generations, English creates a stunning image of this much venerated Christian saint. With prose as enjoyable as it is informative, he shows why the life--and death--of Nicholas of Myra so radically influenced the formation of Western history and Christian thought, and did so in ways many have never realized.

Adam C. English is Associate Professor of Religion at Campbell University where he teaches on the philosophy of religion, constructive theology, and the history of Christian thought. He lives near Raleigh, North Carolina.
Loading...
or support indie stores by buying on