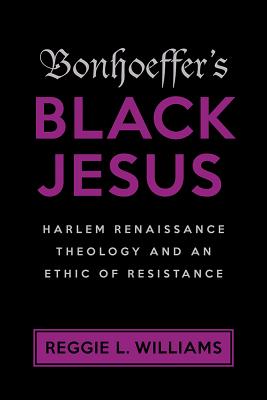 Harlem Renaissance Theology and an Ethic of Resistance

In this book author Reggie L. Williams follows Bonhoeffer as he defies Germany with Harlem's black Jesus. The Christology Bonhoeffer learned in Harlem's churches featured a black Christ who suffered with African Americans in their struggle against systemic injustice and racial violence--and then resisted. In the pews of the Abyssinian Baptist Church, under the leadership of Adam Clayton Powell, Sr., Bonhoeffer absorbed the Christianity of the Harlem Renaissance. This Christianity included a Jesus who stands with the oppressed rather than joins the oppressors and a theology that challenges the way God can be used to underwrite a union of race and religion.

Bonhoeffer's Black Jesus argues that the black American narrative led Dietrich Bonhoeffer to the truth that obedience to Jesus requires concrete historical action. This ethic of resistance not only indicted the church of the German Volk, but also continues to shape the nature of Christian discipleship today.

Reggie L. Williams is Assistant Professor of Christian Ethics at McCormick Theological Seminary. He is a member of the International Dietrich Bonhoeffer Society, as well as the Society for the Study of Black Religion, and a founding member of the Society for the Study of Race, Ethnicity and Religion.
or
Not Currently Available for Direct Purchase
Copyright © 2020 American Booksellers Association