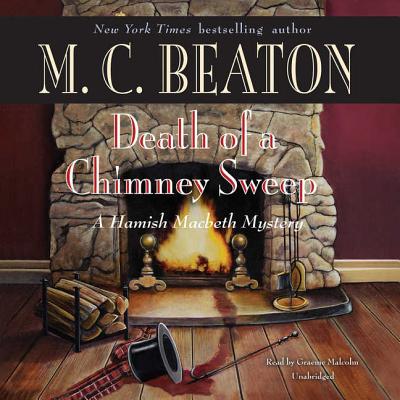 In the isolated villages in the north of Scotland, the villagers rely on the services of the chimney sweep, Pete Ray, and his old-fashioned brushes. Pete is always able to find work in the Scottish highlands--until the day that Police Constable Hamish Macbeth notices blood dripping onto the floor of a villager's fireplace and a dead body stuffed inside the chimney.

The entire town of Lochdubh is certain Pete is the culprit, but Hamish doesn't believe that the affable chimney sweep is capable of committing murder. Then Pete's body is found on the Scottish moors, and the mystery deepens. It's up to Hamish to discover who is responsible for the dirty deed--and this time, the murderer may be closer than he realizes.

In addition to the popular Hamish Macbeth series, M. C. Beaton also writes the Agatha Raisin mystery series and Regency romances under her real name, Marion Chesney. She lives in the Cotswolds in England with her husband.

Graeme Malcolm has performed on Broadway as Pharaoh in "Aida, " and as Sir Edward Ramsay in "The King and I." His television credits include "Law & Order, Against the Law, Criminal Intent" and "The Guiding Light." He has narrated hundreds of audiobooks.
Loading...
or
Not Currently Available for Direct Purchase