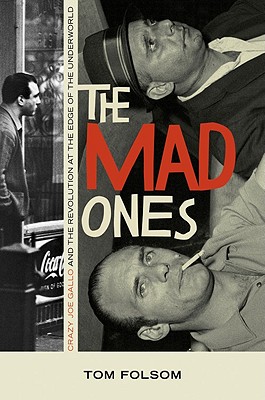 “The '60s were a time of revolution and upheaval, and organized crime was not immune from social change. Tom Folsom tells of the Gallo brothers' quixotic challenge to crime's power structure and breathes life into a mostly forgotten New York society on the edge of a new world.”
— Bill Cusumano, Nicola's Books, Ann Arbor, MI
View the List

A POWERFUL COLLISION OF TRUE CRIME AND POP CULTURE, THE MAD ONES CAPTURES THE REVOLUTIONARY SPIRIT OF THE SIXTIES AND BRINGS TO LIFE ONE OF THE MOST VIBRANT ANTIHEROES IN AMERICAN HISTORY.

The Mad Ones chronicles the rise and fall of the Gallo brothers, a trio of reckless young gangsters whose revolution against New York City's Mafia was inspired by Crazy Joe Gallo's forays into Greenwich Village counterculture.

Crazy Joe, Kid Blast, and Larry Gallo are steeped in legend, from Bob Dylan's eleven-minute ballad "Joey" to fictionalizations central to The Godfather trilogy and Jimmy Breslin's The Gang That Couldn't Shoot Straight. Called the toughest gang in the city by the NYPD, the Gallos hailed from the rough Red Hook neighborhood on the Brooklyn waterfront. As low-level Mafiosi, they were expected to serve their Don quietly, but the brothers stood apart from typical gangsters with their hip style, fierce ambition, and Crazy Joe's manic idealism.

Joey aspired to be more than a common hood and immersed himself among the Beatniks and bohemians of the Village. Yearning to live the life of an artist, Joey wrote poetry, painted, and got his kicks devouring existential philosophy. Celebrated as the "king of the streets" by Dylan, Joey was embraced by the city's leading cultural figures as an antihero straight out of Camus.

Here, for the first time, is the complete story of the Gallos' war against the powerful Cosa Nostra, an epic crime saga that culminates in Crazy Joe's murder on the streets of Little Italy, where he was gunned down mid-bite into a forkful of spaghetti in 1972. The Mad Ones is a wildly satisfying entertainment and a significant work of cultural history.