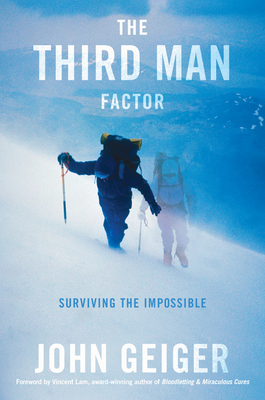 The Third Man Factor is an extraordinary account of how people at the very edge of death experience the sense of an unseen presence beside them who encourages them to make one final effort to survive. This incorporeal being offered them a feeling of hope, protection, and guidance, and left the person convinced he or she was not alone. There is a name for this phenomenon: It's called the Third Man Factor.

If only a handful of people had ever encountered the Third Man, it might be dismissed as an unusual delusion shared by a few overstressed minds. But over the years, the experience has occurred again and again, to 9/11 survivors, mountaineers, divers, polar explorers, prisoners of war, sailors, shipwreck survivors, aviators, and astronauts. All have escaped traumatic events only to tell strikingly similar stories of having sensed the close presence of a helper or guardian. The force has been explained as everything from hallucination to divine intervention. Recent neurological research suggests something else.

Bestselling and award-winning author John Geiger has completed six years of physiological, psychological, and historical research on The Third Man. He blends his analysis with compelling human stories such as Ron diFrancesco, the last survivor out of the World Trade Center on 9/11; Ernest Shackleton, the legendary explorer whose account of the Third Man inspired T.S. Eliot to write of it in The Wasteland; Jerry Linenger, a NASA astronaut who experienced The Third Man while aboard the Mir space station-and many more.

Fascinating for any reader, The Third Man Factor at last explains this secret to survival, a Third Man who-in the words of famed climber Reinhold Messner-"leads you out of the impossible."

John Geiger is the author of five books, including the bestsellers The Third Man Factor: Surviving the Impossible and Frozen in Time: The Fate of the Franklin Expedition. A member of the editorialboard of the Toronto Globe and Mail, he is also a fellow of the Explorers Club, governor of the Royal Canadian Geographical Society, and chair ofthe Society's Expeditions Committee. His work has been translated into nine languages. Born in Ithaca, New York, he lives in Toronto.

Praise For The Third Man Factor: Surviving the Impossible…

"There is a curious force capable of guiding the destiny of men and women in extreme peril and John Geiger knows what it is."—Wade Davis, Explorer-in-residence at the National Geographic Society and author of The Serpent and the Rainbow

"With an irresistible blend of harrowing anecdotes and hard science, John Geiger unravels the mystery of how the mind copes under extreme duress and in the process sheds fresh light on what it is to be human. A compelling, moving read."—Carl Honoré, Author of In Pursuit of Slow and Under Pressure