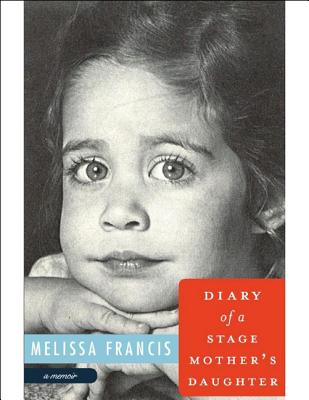 Diary of a Stage Mother's Daughter

When Melissa Francis was eight years old, she won the role of lifetime: playing Cassandra Cooper Ingalls, the little girl who was adopted with her brother (played by young Jason Bateman) by the Ingalls family on the world's most famous primetime soap opera, Little House on the Prairie. Despite her age, she was already a veteran actress, living a charmed life, moving from one Hollywood set to the next. But behind the scenes, her success was fueled by the pride, pressure, and sometimes grinding cruelty of her stage mother, as fame and a mother's ambition pushed her older sister deeper into the shadows.

Diary of a Stage Mother's Daughter is a fascinating account of life as a child star in the 1980's, and also a startling tale of a family under the care of a highly neurotic, dangerously competitive "tiger mother." But perhaps most importantly, now that Melissa has two sons of her own, it's a meditation on motherhood, and the value of pushing your children: how hard should you push a child to succeed, and at what point does your help turn into harm?

Praise For Diary of a Stage Mother's Daughter: A Memoir…

Hoda Kotb, author of Hoda: How I Survived War Zones, Bad Hair, Cancer, and Kathie Lee, and co-host of the Today show
“I am always in search of the book I can’t put down.  Well, thanks to Melissa Francis, I FOUND it. I may have missed a few nights sleep, but I am so much better for it.  Her book is captivating, revealing and ultimately healing.   Who knew the kid from Little House on the Prairie had such a fascinating real-life story?  I am in awe.”

Kirkus Review
"Chilling memoir by a Fox Business Network anchor and child star chronicles the misery of growing up with a cruel, controlling and abusive stage mother. Francis' narrative grabs readers immediately. One of those intimate, heartbreaking, doubled-edged stories that is hard to read, impossible to put down."

"Diary of A Stage Mother's Daughter is touching and brave, heartbreaking and inspirational...I simply loved it."
—Jeannette Walls,

"[A] memoir...that you will never forget. It is captivating, revealing, and had me glued to the pages."
—BlogCritics.org

"What makes Diary of A Stage Mother's Daughter so compelling aren't just the behind-the-scenes details but the spirited conclusion."
—Entertainment Weekly

"The against-all-odds story...is, by turns, harrowing, shocking, and inspiring. Ultimately, it is a celebration of Francis' greatest role: survivor."
—Elle.com Reader's Choice blog

"Melissa Francis' story is riveting. The book is the perfect antidote for the 'Tiger Mom' syndrome that seems to be gaining traction in today's society...If you want to be inspired to reach beyond what you were taught as a child, get this book now."
—Melissa Gilbert, author of the bestselling "Prairie Tale: A Memoir"

Melissa Francis is an anchor, inspirational speaker, and host on the Fox Business Network and Fox News Channel, and a regular contributor on financial, economic, and political issues on shows such as The Five, Outnumbered, Happening Now, and America's Newsroom. Prior to her role at Fox, Melissa spent nine years at CNBC anchoring Power Lunch, The Call, and On the Money. She co-hosted It's the Economy on MSNBC with Contessa Brewer. She contributed to the Today Show, NBC Nightly News, and Weekend Today.

As an actress she appeared in numerous motion pictures, television series, and commercials. She is best known for her role of Cassandra Cooper Ingalls on Little House on the Prairie.

Melissa grew up in Los Angeles and earned an honors degree in Economics from Harvard University. She now lives in Manhattan with her husband and three children.
or
Not Currently Available for Direct Purchase