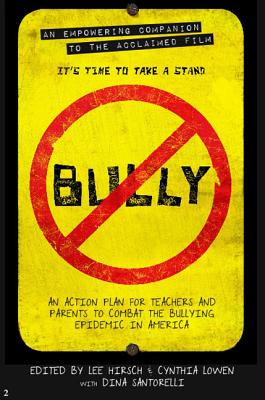 An Action Plan for Teachers, Parents, and Communities to Combat the Bullying Crisis

A companion book to the acclaimed documentary film that inspired a national conversation, BULLY is packed with information and resources for teachers, parents, and anyone who cares about the more than 13 million children who will be bullied in the United States this year. From commentary about life after BULLY by the filmmakers and the families in the film, to the story of how Katy Butler’s petition campaign helped defeat the MPAA’s “R” rating, BULLY takes the story of the film beyond the closing credits. Celebrity contributions combine with essays from experts, authors, government officials, and educators to offer powerful insights and concrete steps to take, making the book an essential part of an action plan to combat the bullying epidemic in America.


Praise For Bully: An Action Plan for Teachers, Parents, and Communities to Combat the Bullying Crisis…

New York Times, Critics Pick
“Moving and touching… Bully forces you to confront…the extent to which that cruelty is embedded in our schools and therefore in our society as a whole.”
TIME
“A documentary as vivid as any horror film, as heartbreaking as any Oscar-worthy drama.”
Los Angeles Times
“The film’s cumulative force is considerable.”

USA Today
“An insightful and moving documentary…By presenting an intimate glimpse into the dark heart of cruelty, the film hopes to inspire substantive discussion among parents, children, and educators on how to deal with this dire and insidious problem.”

Publisher's Weekly
"The text deals honestly and realistically with the bullying that is so pervasive in American schools...An excellent resource for educators...Readers who have seen the film will no doubt be interested to discover where its bullied children are now, but the text can also be read as an informative stand-alone resource."

Kirkus Review
"A valuable resource that will help empower communities to deal with this deadly social plague."
—-

Lee Hirsch's debut film, Amandla! A Revolution in Four Part Harmony, is a feature documentary chronicling the history of the South African anti-apartheid struggle through a celebration of its musical heroes. This film was released to wide acclaim, winning the Audience and Freedom of Expression Awards at the 2002 Sundance Film Festival. Among the many honors the film received were five Emmy nominations and a win. Lee Hirsch was born and raised on Long Island, New York, and attended the Putney School in Vermont and Hampshire College. He currently lives in Manhattan.

Cynthia Lowen is an award-winning writer and recipient of the Discovery Prize. She is the coauthor of The Essential Guide to Bullying forthcoming from Alpha Books, and her work has been published widely in journals including A Public Space, Best New Poets 2008, Boston Review, Provincetown Arts, and Tin House, among others. She is also the producer of Going Home, a two-part documentary about teenage incarceration and recidivism. She lives in New York City.

Dina Santorelli is a freelance writer and editor who has written for a variety of publications, including Newsday, First for Women and CNNMoney.com. She is the coauthor of Good Girls Don't Get Fat, a nonfiction book about girls' self-esteem and body image (Harlequin, 2010), and currently serves as Executive Editor of Salute and Family magazines for which she has conducted numerous celebrity interviews. Her first novel, Baby Grand, will be published in fall 2012, and she blogs about the writing life at http://makingbabygrand.com. She lives on Long Island, New York.
Loading...
or
Not Currently Available for Direct Purchase