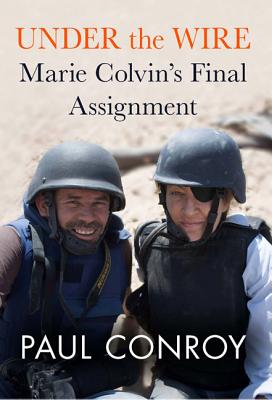 The true story of iconic war correspondent Marie Colvin (called by her peers "the greatest war correspondent of her generation") featured in the film A Private War, produced by Charlize Theron and starring Rosamund Pike. Also the basis of the documentary Under the Wire.

Marie Colvin was an internationally recognized American foreign war correspondent who was killed in a rocket attack in 2012 while reporting on the suffering of civilians inside Syria. She was renowned for her iconic flair and her fearlessness: wearing the pearls that were a gift from Yasser Arafat and her black eye-patch, she reported from places so dangerous no other correspondent would dare to go.

Photographer Paul Conroy forged a close bond with Colvin as they put their lives on the line time and time again to report from the world's conflict zones, and he was by her side during her final assignment. A riveting war journal, Under the Wire is Paul's gripping, visceral, and moving account of their friendship and the final year he spent alongside her.

When Marie and Paul were smuggled into Syria by rebel forces, they found themselves trapped in one of the most hellish neighborhoods on earth. Fierce barrages of heavy artillery fire rained down on the buildings surrounding them, killing and maiming hundreds of civilians. Marie was killed by a rocket which also blew hole in Paul's thigh big enough to put his hand through. Bleeding profusely, short of food and water, and in excruciating pain, Paul then endured five days of intense bombardment before being evacuated in a daring escape in which he rode a motorbike through a tunnel, crawled through enemy terrain, and finally scaled a 12-foot-high wall.

Astonishingly vivid, heart-stoppingly dramatic. and shot through with dark humor, in Under the Wire Paul Conroy shows what it means to a be a war reporter in the 21st century. His is a story of two brave people drawn together by a shared compulsion to bear witness.

Praise For Under the Wire: Marie Colvin's Final Assignment…

Bookviews
“Anyone who has spent any time in a war zone, in combat, or just wondering what it is like will thoroughly enjoy this book. One might say they shared a foxhole or two together and the story he tells is gripping and a great tribute to his friend, a great journalist.”
Sunday Times
“A fine and gripping account of how the brave, rackety band of war reporters and photographers bring the human consequences of war to our breakfast tables.”
The Times, UK
“Paul Conroy's touching memoir...is a tribute to the metier of reporting conflict...It's a touching, if heartbreaking story.”
Humphrey Hawksley, BBC
“A masterpiece, possibly the finest account of war of this generation.”
Books Examiner
“This is an eye-opening account of what journalists go through to tell the world about the atrocities going on in war-torn countries like Syria.”

David Remnick, The New Yorker
“Colvin devoted her life—and gave her life—for the proposition that the truth of history demands witnesses. Her death, like that of so many others, is yet another reminder, as if any more were needed, that experience in the field is no shelter from disaster.”
Tom Fletcher, British ambassador to Lebanon
“Paul's experience is a chilling testimony to what families in Homs are experiencing. We need renewed focus on humanitarian support and to put an end to violence.”
Booklist
“In this tense, hour-by-hour account, he takes readers back to Syria and the events that led to their being behind the battle lines… Colvin was a significant voice in international journalism and will be sorely missed, and Conroy's account is unforgettable.”
Vanity Fair
“In Under the Wire, Conroy relives their odyssey and its harrowing final hours.”
Publisher's Weekly
“Conroy's visceral account is provides readers with a greater appreciation for the work of war correspondents and insight into the sacrifices they make.”

Paul Conroy is a former British soldier. As a photographer and filmmaker whose work spans fifteen years, he has reported on conflicts in Iraq, Congo, Kosovo, Libya, and Syria.
or support indie stores by buying on