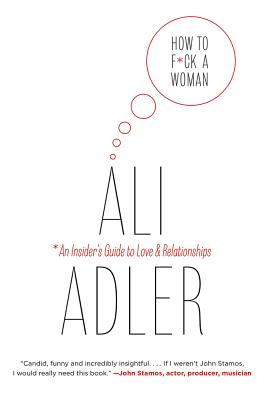 How to F*ck a Woman

Brazen, uproarious, slyly prescriptive, and always entertaining, Ali Adler is a sex and relationship guru who knows what women want. As a gay woman, she has both the equipment and the experience to give straight men (and the women who love them) advice on both how to get more sex and how to get this job done right.

In her day job as a comedy writer and TV producer, Ali is sometimes the only woman in a room full of comedy writers. She became legendary for offering frank, sometimes insightful, often bossy reality checks and for translating female sexuality into words a man could understand.

In her book, How to F*ck a Woman -- 20 percent explicit instructions, 80 percent relationship advice, and 100 percent hilarious -- she brings together essential advice for men (even the ones who insist they could write this book) and the women who want their lovers to truly understand them, both mind and body.

Ali Adler is a TV writer and producer. Most recently she co-developed Supergirl for television. She is the co-creator of The New Normal and has worked on various other shows, including Glee, Chuck, and Family Guy. The mother of two children, Ali lives in Los Angeles with fiancee Liz Brixius.

Liza Donnelly is a contract cartoonist and writer with New Yorker Magazine, and has been writing cartoons and commentary on culture, politics, and relationships for over thirty years. Donnelly is the author/editor of sixteen books, most recently Women on Men. She lives in New York with her husband, cartoonist Michael Maslin.
Loading...
or
Not Currently Available for Direct Purchase