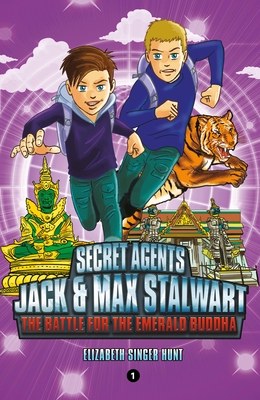 Book 1: The Battle for the Emerald Buddha: Thailand (The Secret Agents Jack and Max Stalwart Series #1)

Temporarily retired from the GPF-Global Protection Force-and on family vacation, Jack Stalwart and his older brother, Max, are motivated to act when a band of thieves takes the Emerald Buddha from the Grand Palace in Bangkok. Without the help of the GPF, they're on their own. They're also up against one of the smartest and wealthiest villains they've ever faced. Can Jack and Max find Thailand's most precious statue before it's too late?

Elizabeth Singer Hunt is best known as the award-winning author of the Secret Agent Jack Stalwart chapter book series for younger readers. The fourteen-book series has been named a 'must read' for boys by the British Education Secretary, serialized by BBC Radio, and featured on Virgin Atlantic Airways' international flights.

Elizabeth lives in California with her husband and two children, and is an advocate for the Eco-Soap Bank, a public health nonprofit working to save lives in rural Cambodia.

"Piles of these books make great summer reading... a great motivator for children to stretch their brains over the summer."

"This page-turner series... takes readers on a wild adventure while they learn a bit about world history and geography."
—Lincoln Journal-Star

"The best element of the series are the geographic locations--from China to Italy--that readers get to explore while on their wild ride with [Jack Stalwart]."
—Parent Map
or
Not Currently Available for Direct Purchase
Copyright © 2020 American Booksellers Association