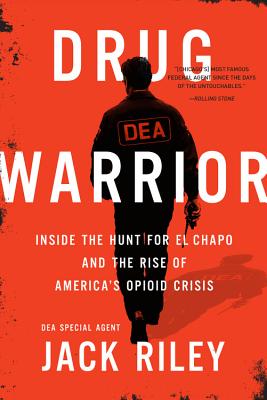 DEA Agent Jack Riley, "[Chicago's] most famous federal agent since the days of The Untouchables" (-Rolling Stone)tells the inside story of his 30-year hunt for the drug kingpin known as El Chapo, and reveals the true causes of the American opioid epidemic.

Jack Riley, grandson of a Chicago cop known for using his fists, was born to be a drug warrior. Joaquín "El Chapo" Guzmán Loera, who farmed marijuana and opium poppies as a teenager in Mexico, was born to be a drug lord. Their worlds collided when Riley, a career special agent with the Drug Enforcement Administration, was promoted to lead the fight against Chapo on the border at El Paso.

Drug Warrior is the story of Riley's decades-long hunt for the world's most wanted drug lord, set against the rise of modern international drug trafficking, and America's spiraling opioid epidemic. Jack Riley started his career as an undercover street agent in Chicago busting small-time dealers. By the time he worked his way up to second in command of the DEA-a post few field agents ever reach-he had overseen every major mission to capture foreign drug kingpins since the 1990s, and had witnessed first-hand how El Chapo changed the game. As brilliant as he was lethal, Chapo not only decimated his competition, he foresaw Americans' dependence on opioids and heroin, and manipulated supply to increase demand. Riley's story culminates as he and the DEA win their greatest victory-the capture and extradition of his long-time nemesis-and Chapo faces his darkest fear: U.S. justice.

A riveting memoir of life inside the drug wars, and a never-before-seen glimpse of the inner-workings of the DEA, Drug Warrior is a critical examination of how America's opioid crisis came to be, and the extraordinary people fighting it.

Praise For Drug Warrior: Inside the Hunt for El Chapo and the Rise of America's Opioid Crisis…

"Drug Warrior is a riveting account of America's drug war. Jack Riley steps right out of central casting: a tough cop on a mission. But Drug Warrior goes beyond Riley's gruff exterior and shows the trials and tribulations of fighting a war that can't be won. Riley's sense of duty is the heart of the book. Want to better understand America's first forever war? You'll find answers here."—Kevin Maurer, co-author of the New York Times bestsellers No Easy Day and American Radical, -

"[An] entertaining, no-holds-barred memoir....To know Jack Riley is clearly to know a Damon Runyonese-type character; a person larger than life....Riley's memoir makes a compelling and irrefutable case on why a purely criminal justice approach cannot and will not succeed. The unvarnished, candid, and irreverent insights that Riley so willingly shares can be repeated ad infinitum by many of my former colleagues and myself, who also experienced the very hell of which Riley speaks."
—Frederick T. Martens, Criminal Law and Criminal Justice Books at Rutgers University

"For 15 years, Chapo has been Riley's white whale, the object of an obsession that teetered on derangement and sidelined everything else, including his family... A ruddy, white-haired bruiser who holds court from a bar stool, Riley seemed dispatched from the days of fedoras and cops lighting Luckies at crime scenes."

"Riley's intensity and charisma have made him one of the most quoted and
recognizable advocates for drug enforcement in the country."
—Chicago Reader, -

"Drug Warrior is an interesting look at the life and times of both Guzman, a major drug trafficker, and Mr. Riley, the DEA special agent who relentlessly pursued him."—The Washington Times

"A sturdy, unadorned tale of true crime and its foes."
—Kirkus Reviews, -

John "Jack" Riley spent his DEA career combating Mexican and Colombian cartels and drug-related gang violence. At the time of his retirement, Riley was the highest ranking career Special Agent at the DEA, serving as the organization's second in command, overseeing global drug enforcement efforts.

Mitch Weiss is a Pulitzer Prize-winning investigative journalist currently working for the Associated Press. Over the last 25 years, he has investigated government corruption, white-collar crime, police misconduct, and clerical sexual abuse. His books include Tiger Force and The Heart of Hell: The Untold Story of Courage and Sacrifice in the Shadow of Iwo Jima.
Loading...
or support indie stores by buying on