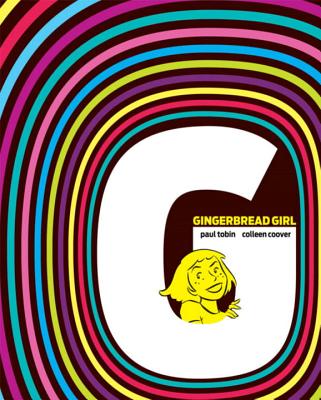 There are plenty of established facts concerning 26-year-old Annah Billips. She likes sushi and mountains, but hates paper cuts and beer breath. She dates girls and boys, and loves to travel. She may have a missing sister, or she might be insane. Did Annah invent an imaginary sister named Ginger during her parents' ferocious divorce, or did her mad scientist father extract part of her brain and transform it into a living twin?
In this graphic novel, a host of narrators including boyfriends, girlfriends, magicians, pigeons, bulldogs, and convenience store clerks follow Annah through a night in her life in an attempt to determine that one last fact about Annah…and the Gingerbread Girl.

Paul Tobin is a New York Times bestselling author. His writing includes Bandette; Colder; The Genius Factor series; as well as many other comic books and works of fiction.

Bandette, drawn by Colleen Coover, was awarded the Eisner Award for Best Digital Series in 2013 and 2016; it was a finalist for the Oregon Book Award for Graphic Literature in 2016. Paul’s graphic novel I Was the Cat, created with artist Benjamin Dewey, was nominated for an Eisner in 2015. Colder, the horror comic he created with artist Juan Ferreyra, was also nominated that same year. Paul's comic book adaptations of other media include Plants Vs. Zombies, Angry Birds Comics, and The Witcher.
or
Not Currently Available for Direct Purchase
Copyright © 2020 American Booksellers Association