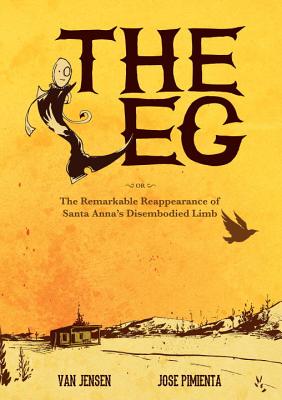 Writer Van Jensen (PINOCCHIO, VAMPIRE SLAYER; THE FLASH) and artist Jose Pimienta bring you the strangest hero that comics have ever seen! The disembodied leg of Santa Anna has returned from the grave -- and with Mexico once again in peril, it's up to the Leg to save the country in this rollicking, surreal adventure story that blends Spaghetti Westerns with Mexican history and folktales. Join the Leg on his unforgettable journey.

Van Jensen is the writer of the Pinocchio, Vampire Slayer series, which has been named to the Ten Great Graphic Novels for Teens list by YALSA. He's also written several other comics (including The Leg, Cryptocracy, and DC superhero titles such as Green Lantern Corps and The Flash) and lots of articles for various magazines and newspapers. He grew up outside a village in western Nebraska but now lives in Atlanta, GA, with his wife and their dog. In May 2016, he was named a "comic book ambassador" from the USA to the Republic of Georgia.
Loading...
or
Not Currently Available for Direct Purchase