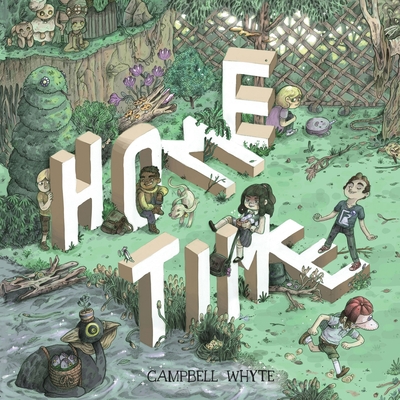 The last school bell has rung and it’s finally HOME TIME! Even though they’re twins, Lilly and David don’t agree on much… except that the last summer before high school is the perfect time for relaxing with friends. But their plans for sleepovers, fantasy games, and romance are thrown out the window when the whole gang falls into a river and wakes up in a village of fantastic creatures. Hailed as magical spirits and attacked by lizards, these kids must find their way home — if they don’t throttle each other first. Australian cartoonist Campbell Whyte combines the rich imagination of Dungeons & Dragons with puckishly charming characters and a touch of video-game geometry in his spectacular first graphic novel.

Praise For Home Time (Book One): Under the River…

"Exuberant... It’s a richly imagined world, and Whyte immerses readers in it." — The New York Times

"A highly original graphic novel adventure... it goes from curious to interesting to compelling to engrossing — the momentum keeps building to the point where we're on pins and needles." — Under the Radar

"Whyte’s world-building is as impressive as his ambitious story and his mastery of the half-dozen styles he wears... Built on a foundation of kids’ fantasy classics, but with the specifics of its world unique and the psychological drama wild and unpredictable as the pre-teen mind, Home Time feels both comfortably familiar and refreshingly new and unusual at the same time." — School Library Journal's Good Comics for Kids

"Home Time: Under the River may end up being the best or be on the shortlist of best graphic novels for any age this year...There is more imagination in Whyte's story than you will find in an entire year of most of Marvel and DC Comics's superhero comic book titles." — Leroy Douresseaux, Comic Book Bin

Home Time
Campbell Whyte. Top Shelf, $24.99 (228p) ISBN 978-1-60309-412-2
On the last day of primary school, an eclectic and somewhat combative group of friends plans to celebrate with an epic two-night sleepover. Things go awry when they fall into a river and are transported to the Forest of the Peaches, where they are met by humanoid creatures who believe the children are gods who have come to save them from the Lizard Empire. As months pass in this strange world, some of the children become more acclimated than others, resulting in increased tension in the group. Visually, the story invokes the surrealism of Carroll’s Wonderland with exotic flora, fauna, and curiosities around every corner, and there are echoes of Lewis’s Narnia in the plot’s focus on children-saviors in an alternate world. Australian comics creator Whyte shifts artistic style with each chapter, moving from pencil sketches to bright, borderline psychedelic cartoons and even a chapter with a pixelated motif à la vintage arcade games. It’s both alienating and engaging, keeping readers as off-balance as the children, who are trapped in an alien landscape they don’t quite understand. Ages 13–up. -Publishers Weekly

Campbell Whyte was born in Perth, Western Australia, wedged between a restless ocean and an endless desert. He began making things not long after his birth, and today that rich tradition continues. When not making comics, Campbell runs the children's art school Milktooth with his wife, son, and hairless dog.
Loading...
or support indie stores by buying on