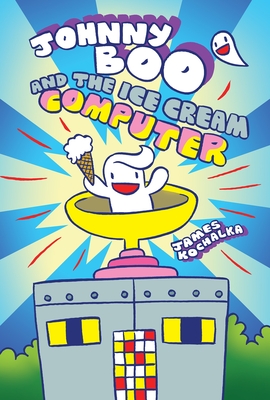 "The best little ghost in the world," and his pet ghost, Squiggle, are back in their most delicious adventure yet! It's a new delightful romp for young readers and families from the award-winning imagination of Vermont's first Cartoonist Laureate, James Kochalka.

Johnny Boo creates an incredible Ice Cream Computer that can turn anything into delicious ice cream. Old toys that you don't want to play with anymore? Ice cream! Clods of dirt and grass? Ice cream! It works great... until Squiggle decides to turn himself into ice cream! Then: Johnny Boo time travels to the future, where the Mean Little Boy tries to add him to his butterfly collection. Can Squiggle save the day, or will everyone get turned into ice cream??

Among his best known works are the Monkey vs Robot series, the beloved Johnny Boo and Dragon Puncher series for children, and his magnum opus, the decade-plus span of daily diary comics known as American Elf. James lives in Burlington, Vermont with his wife, Amy; their two sons; and their cats, all of whom appear frequently in his comics.