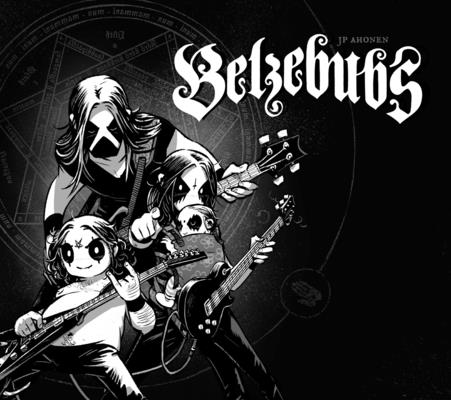 Juggling work and family can be... hell. Calvin & Hobbes meets Call of Cthulhu as the sensationally popular heavy metal webcomic Belzebubs comes to print in a grim, goofy, and gorgeous hardcover.

Belzebubs is a "trve kvlt mockumentary" focusing on the everyday challenges of family life: raising kids, running a small business, and making time for worship. Except the kids are named Lilith and Leviathan, the business is a black-metal band, and the worship... isn't exactly aimed upstairs.

In a few short years, what started out as improvised social-media doodles has now become a wildly successful webcomic with hundreds of thousands of fans. The irresistible cartooning of JP Ahonen (Sing No Evil) combines relatable slice-of-life humor with over-the-top occult antics and references from metal music to Lovecraftian horror, making Belzebubs a devil of a good time.

After spending his teenage years immersed in making music and comics, Ahonen continued to the University of Lapland to study graphic design in the Faculty of Arts. Today, JP works as a full-time comic book artist and teaches classes in schools and universities. He lives in Tampere, Finland with his wife and kids.

“As twisted as it is sidesplitting… [Belzebubs] weaves slice-of-life drama and mockumentary-style humor into a pentagram of laughs, relatable moments, and a love for black metal.” — Publishers Weekly (starred review)

"This webcomic has become a cult sensation... it’s a silly, Addams Family-esque family comedy with a perfect cartoony style." — Barnes & Noble (Best of the Month)

"Pure joy… the whole book works as a loving parody of all the idiosyncrasies that make the black-metal scene both wonderful and ridiculous." — Brett Calwood, LA Weekly (Book of the Week)

"Belzebubs takes the blueprint of the modern nuclear family and gleefully twists it into a counter-culture extravaganza that would make Charles Addams and Al Feldstein grin with delight and throw the horns high... one of the funniest, most instantly relatable and charming books it has been my pleasure to read in many a year." — Tim Cundle, Mass Movement

"Even if you're not a black-metal-loving, corpse-paint-wearing kind of goth, this comic is still for you... Of course, if you are full-on goth (corpse paint or no), you will die laughing... I know I did!" — Sheena McNeil, Sequential Tart

"They’re like Gorillaz, except cooler and more kvlt." — Decibel

"While this can be read and enjoyed at face value, it is also an interesting take on the concept of an outsider and sub culture and portrays this as a happy loving family who in their own way are totally well-adjusted." — House of Prog

"Hilarious, inventive, and original, it’s a hard read to put down… Belzebubs brings a really new viewpoint and take on a genre known for taking itself too seriously." — Spill Magazine
or support indie stores by buying on
Copyright © 2020 American Booksellers Association