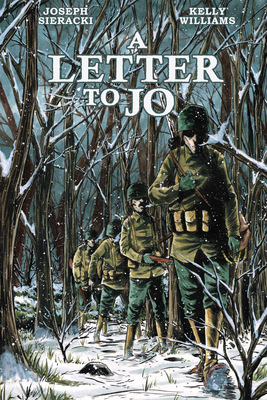 A Letter To Jo

Come face-to-face with the raging terror of World War II in this firsthand graphic novel adaptation of a Polish-American machine gunner's letter home.

As Leonard fights on the frontlines of World War II, memories of Josephine and home help keep him alive. As Josephine contends with life, family, and work in Cleveland, letters from Leonard sustain her. But official censorship forces him to leave out much of the most significant action he sees.

Finally, with the war coming to an end, Leonard is able to tell his full story. In a quietly beautiful letter to Josephine, Leonard writes of the loneliness he felt, the camaraderie he experienced, and the terrible violence he witnessed.

Now, Josephine and Leonard's grandson Joseph Sieracki has carefully researched the battles Leonard describes and expanded the letter into a moving tale of a young man's fears and bravery far from home. Brought to heart-wrenching life by the paintbrushes of Kelly Williams (Creepy, Eerie), A Letter to Jo is at once a tender love story and harrowing battlefield memoir.

Praise For A Letter To Jo…

"Sieracki effortlessly adapts his grandfather's letters into a narrative that feels both intimate and sweeping... Williams captures the desolation of the battlefields and the bloodcurdling violence of government-sanctioned killing. But through it all, the love story conquers the darkness so hauntingly illustrated." — School Library Journal

"There’s a horrible beauty in Williams' depiction of the war experience, like isolated segments from a Bosch painting transported to the war in Europe. What A Letter To Jo accomplishes is placing that personal experience of Leonard in a wider context, the war experience as well as the romance with Sieracki’s grandmother. It is, truly, the American story of that era." —The Beat

"It’s both beautiful and terrifying, and not to be missed." — 13th Dimension

"A Letter to Jo serves as a touching tribute to those affected by war, and small glimpse for those who are lucky enough to never experience it... Kelly Williams uses incredibly detailed line work mixed with some of the best watercolors I’ve ever seen in a comic." — AiPT

Joseph Sieracki was born and raised in Cleveland, Ohio. There he earned his undergrad at Ohio University and his Master's degree at Cleveland State. He is currently teaching in a suburb of Cleveland, residing with his wife, Andrea; daughter, Quinn; and dog, Bentley. A Letter To Jo is his first graphic novel.

Kelly Williams makes comics. Sometimes writes, just about always draws. He has done work with Dark Horse, BOOM!, IDW, Image, Alterna and more. Best known for the graphic novels The Cabinet and Metaphase along with his work in Eerie and Creepy. He exists in the middle of America with a wife, daughter, dog, and cat.
Loading...
or
Not Currently Available for Direct Purchase