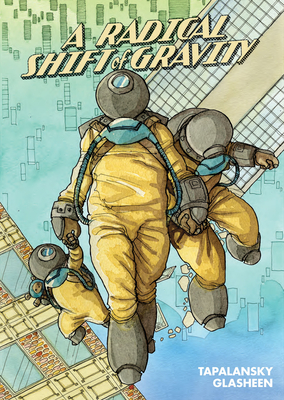 A Radical Shift of Gravity

Against the wondrous backdrop of massive planetary transformation, this stunning watercolor graphic novel explores one family's struggle to stay grounded.

The world is changing. Gravity, a force everyone takes for granted, has begun to disappear. As a young journalist, Noah spends his days documenting the wondrous and terrifying shifts in the world around him.

But Noah's life is changing, too. Falling in love and raising a rebellious daughter adds new meaning to life in this mysterious floating world. As he covers the invention of new sports, interviews experts, and even journeys into space, each experience shapes how Noah views the world and, in turn, his relationship with his family.

And as his daughter grows older, Noah faces the challenge every parent dreads and dreams of: letting go.

A Radical Shift of Gravity is a science-fiction fable: a graphic novel that explores the ties that bind a family together, the forces that threaten to pull them apart, and the quiet beauty of a world where everyone is floating away.

Praise For A Radical Shift of Gravity…

"This beautiful book is very smart about global catastrophes and very honest about personal ones. For everyone asking ‘How can we raise a family in a world like this?’, A Radical Shift of Gravity offers a powerful answer.” — Jeff Lemire

Nick Tapalansky writes some comics that you should totally read, including Awakening, Cast No Shadow, and the forthcoming graphic novel Samantha Loring and the Impossible World. His work has also been included in the award-winning Popgun and Mouse Guard: Legends of the Guard anthologies. He currently lives in New York with his patient wife and amazing daughter.

Kate Glasheen graduated in 2004 from Pratt Institute in Brooklyn, NY. Kate has been a creator, artist, and contributor for several critically acclaimed books and has participated in exhibitions across the country. In addition to A Radical Shift of Gravity, her published works include Adventure Time (BOOM Studios), Hybrid Bastards! (Archaia Entertainment), The Sakai Project (Dark Horse Comics), multiple entries in the Graphic Canon series (Seven Stories Press), Resist! (Françoise Mouly, Nadja Speigleman, and Desert Island), as well as her own passion project, the Kickstarter-funded Bandage: A Diary of Sorts.
Loading...
or
Not Currently Available for Direct Purchase