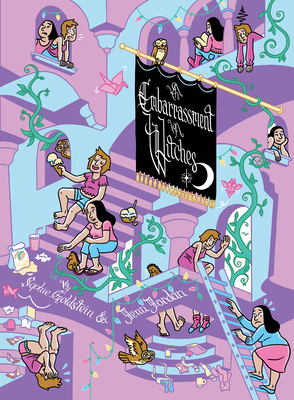 An Embarrassment of Witches

A coming-of-age urban fantasy set in a world full of animal familiars, enchanted plants, and spell-casting that explores the mundane horrors of breakups, job searches, and post-graduate existential angst.

Life after college isn't turning out exactly as Rory and Angela had planned. Rory, recently dumped at the gate of her flight to Australia, needs to find a new life path ASAP. What do you do with a B.A. in Communications and a minor in Southeast Asian Spellcraft? Maybe her cute new housemate Guy is the answer she's looking for (spoiler alert: he isn't).

Meanwhile, Angela is buckling under the pressure of a high-stakes internship in a cutting-edge cryptopharmocology lab run by Rory's controlling mother, who doesn't know Rory is still in town... and Angela hates keeping secrets.

An Embarrassment of Witches is the story of two childhood friends learning how to be adults--and hoping their friendship can survive the change.

Praise For An Embarrassment of Witches…

Praise for An Embarrassment of Witches:
"This affable coming-of-age fantasy... add[s] a touch of magic to familiar human comedy." — Publishers Weekly

"A fantasy grounded in the mundane, An Embarrassment of Witches is a work with magic at its center, casting a unique spell through its memorable, lovable characters." — Foreword Reviews

"An Embarrassment of Witches is a heartfelt, funny look at how childhood friendships grow up into adult friendships. Goldstein and Jordan give their characters room to make mistakes, change, and learn how to forgive each other (and themselves)." — Melanie Gillman (As the Crow Flies, Steven Universe)

"Sophie Goldstein's artwork looks very simple, but it's the kind of simplicity that's complexity boiled down to a potent concentrate." — The New York Times

"Strong and complex." — The AV Club

"The apocalyptic climax of the strip manages to combine the character work, the mythological work and the snarky modern take on same together into a beautifully satisfying and cohesive package." — HighLow

JENN JORDAN is the co-author of Darwin Carmichael is Going to Hell and is currently working on her doctorate in medieval history at SUNY Stony Brook. Her research focuses on women's movement, knowledge, and identity in medieval Italy. She lives in New York with her person, Steve, and two cats, Samantha and Robin.

SOPHIE GOLDSTEIN is a graphic novelist, illustrator and comics instructor. Her other books include House of Women, The Oven, and Darwin Carmichael is Going to Hell, which have received multiple Ignatz Awards and Best American Comics selections, among other honors. If she could choose an animal familiar it would be a wolf.
Loading...
or
Not Currently Available for Direct Purchase