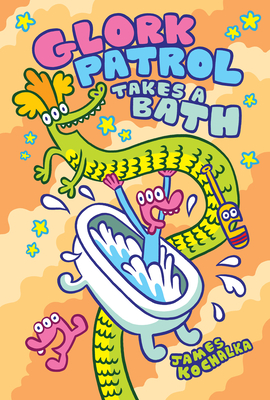 Guess who’s back for even more wacky outer-space adventure? The Glorkian Warrior and his crew! It’s a sticky, soapy, messy delight from the award-winning creator of Johnny Boo and Banana Fox!


What a mess! It all started when Glorkian SuperGrandma told the Glork Patrol they could eat candy for breakfast… now their “Dada,” the Glorkian Warrior, has a lot of cleaning up to do. Super Backpack gets a robot super-suit made of candy wrappers and takes Baby Gonk on the adventure of a lifetime, while Glorkian Warrior stays behind and tries to help the uncontrollable Baby Quackaboodle take a bath.

Families come in all kinds… even in outer space. This kooky, colorful adventure will feel hilariously relatable and have kids giggling through story time and bath time alike!

"Hilarious... There’s a lot of slapstick humor and a lot of totally absurd situations, so if your kid likes extreme silliness, this is a fun series to share." — GeekDad

"A perfect graphic novel for adults to read to children... Full of smart cartooning, kids will love it for the colourful characters and silly situations." — How to Love Comics

James Kochalka is, without question, one of the most unique and prolific alternative cartoonists working in America today. His comics have been published internationally by nearly everyone from the smallest alternative publishers to some of the largest publishing houses on earth; he’s recorded several music albums under the name James Kochalka Superstar (in 2016 his song Britney’s Silver Can was named one of the 100 greatest songs of the year by Rolling Stone); and he’s developed animated cartoons for Nickelodeon and Cartoon Hangover. He is the first official Cartoonist Laureate of the state of Vermont, appointed in 2011. Among his best known works are the Monkey vs Robot series, the beloved children’s series Johnny Boo, Dragon Puncher, Glork Patrol, and Banana Fox, and his magnum opus, the 14-year span of daily diary comics known as American Elf.
Loading...
or support indie stores by buying on