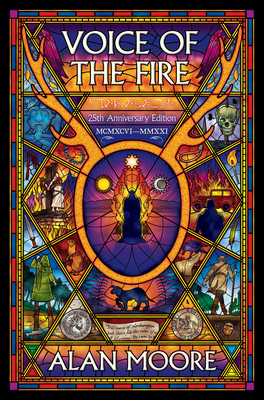 Discover the astonishing first prose novel from the legendary author of Watchmen and From Hell — an epic yet intimate portrait of a single English town across the whole span of human history.

The precursor to Jerusalem.

In a story full of lust, madness, and ecstasy, we meet twelve distinctive characters that lived in the same region of central England over the span of six thousand years. Their narratives are woven together in patterns of recurring events, strange traditions, and uncanny visions. First, a cave-boy loses his mother, falls in love, and learns a deadly lesson. He is followed by an extraordinary cast of characters: a murderess who impersonates her victim, a fisherman who believes he has become a different species, a Roman emissary who realizes the bitter truth about the Empire, a crippled nun who is healed miraculously by a disturbing apparition, an old crusader whose faith is destroyed by witnessing the ultimate relic, two witches, lovers, who burn at the stake. Each interconnected tale traces a path in a journey of discovery of the secrets of the land.

Throughout, the image of the fire resonates between the tales, while Moore finds a different voice for each character – though most are inherently duplicitous in some manner, leading to a further commentary on the disparity between myth and reality, and which is more likely to endure over time.

With a new cover design by John Coulthart.

Award-winning author Alan Moore is widely considered the best writer of graphic novels in the medium's history. His body of work includes the groundbreaking graphic novels Watchmen, V for Vendetta, The League of Extraordinary Gentlemen, and Lost Girls, as well as the novels Voice of the Fire and Jerusalem and the poem The Mirror of Love. Among his many awards are the Hugo Award, the Locus Award, the Bram Stoker Award, the Eisner Award, and the International Horror Guild Award. He was born and still lives in Northampton, England.
Loading...
or support indie stores by buying on