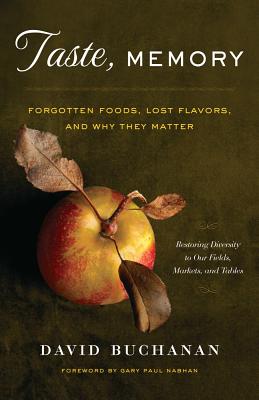 Forgotten Foods, Lost Flavors, and Why They Matter

Taste, Memory traces the experiences of modern-day explorers who rediscover culturally rich forgotten foods and return them to our tables for all to experience and savor.

In Taste, Memory author David Buchanan explores questions fundamental to the future of food and farming. How can we strike a balance between preserving the past, maintaining valuable agricultural and culinary traditions, and looking ahead to breed new plants? What place does a cantankerous old pear or too-delicate strawberry deserve in our gardens, farms, and markets? To what extent should growers value efficiency and uniformity over matters of taste, ecology, or regional identity?

While living in Washington State in the early nineties, Buchanan learned about the heritage food movement and began growing fruit trees, grains, and vegetables. After moving home to New England, however, he left behind his plant collection and for several years stopped gardening. In 2005, inspired by the revival of interest in regional food and culinary traditions, Buchanan borrowed a few rows of growing space at a farm near his home in Portland, Maine, where he resumed collecting. By 2012 he had expanded to two acres, started a nursery and small business, and discovered creative ways to preserve rare foods. In Taste, Memory Buchanan shares stories of slightly obsessive urban gardeners, preservationists, environmentalists, farmers, and passionate cooks, and weaves anecdotes of his personal journey with profiles of leaders in the movement to defend agricultural biodiversity.

Taste, Memory begins and ends with a simple premise: that a healthy food system depends on matching diverse plants and animals to the demands of land and climate. In this sense of place lies the true meaning of local food.

David Buchanan is the author of Taste, Memory. He planted his first gardens in central Washington State more than 20 years ago, after learning about the heritage food movement through the Seed Savers Exchange. He has worked for farms, ranches, and nurseries; operated a landscape design company specializing in native plant restoration; managed an educational farm for a community nonprofit; and helped found the Portland, Maine, chapter of Slow Food USA. In the mid-1990s he worked for Arche Noah, an Austrian seed-saving organization, producing seeds to maintain the thousands of varieties of vegetables and grains in their collection. David helped found and for three years led the Portland, Maine, chapter of Slow Food. He now serves on its national Biodiversity Committee, which evaluates and helps preserve endangered heritage foods from around the country. In 2008 he managed Turkey Hill Farm in Cape Elizabeth, Maine, and continues to maintain gardens there and at two nearby sites. Currently he oversees vegetable and cut flower production for Old Ocean House Farms in Cape Elizabeth, and grows more than 250 varieties of fruit, as well as herbs and heirloom vegetables. He sells nursery plants, organic vegetables, fruit smoothies, and raw cider at the Portland farmers market.
or
Not Currently Available for Direct Purchase
Copyright © 2020 American Booksellers Association