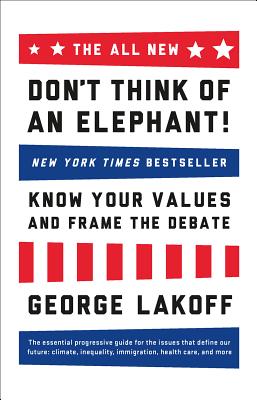 The All New Don't Think of an Elephant!

" Lakoff is] the father of framing."--The New York Times

"An indispensable tool for progressives--packed with new thinking on framing issues that are hotly debated right now.--Jennifer M. Granholm, former governor of Michigan

Called the "father of framing" by The New York Times, Lakoff explains how framing is about ideas--ideas that come before policy, ideas that make sense of facts, ideas that are proactive not reactive, positive not negative, ideas that need to be communicated out loud every day in public.

The ALL NEW Don't Think of an Elephant picks up where the original book left off--delving deeper into how framing works, how framing has evolved in the past decade, how to speak to people who harbor elements of both progressive and conservative worldviews, how to counter propaganda and slogans, and more.

In this updated and expanded edition, Lakoff, urges progressives to go beyond the typical laundry list of facts, policies, and programs and present a clear moral vision to the country--one that is traditionally American and can become a guidepost for developing compassionate, effective policy that upholds citizens' well-being and freedom.