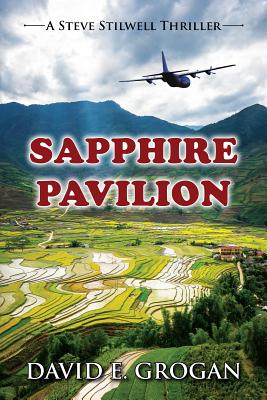 Steve Stilwell's former Navy JAG Corps buddy Ric Stokes has been jailed for possession of heroin in Vietnam. He was found in the same room with his traveling companion Ryan Eversall, who died of an overdose in the company of a prostitute. Steve knows his friend is a straight arrow. Was he set up? If so, for what reason? Steve travels to Ho Chi Minh City in search of the truth.

In no time Steve is targeted by the people who framed his friend. A beautiful young American businesswoman insinuates her way into the case. Can she really help, or is she just a dangerous distraction? Ric and Ryan came to Vietnam in search of an Air Force transport plane that disappeared in 1968. The pilot was Ryan's father. Before the heroin bust, they had located the wreckage. Ryan's notebook, which Steve manages to obtain, spells out the exact location. Ryan's widow has given Steve's associate Casey another piece of valuable evidence, a file labeled "Sapphire Pavilion." Someone is willing to go to any lengths to steal both the notebook and the file.

From Virginia and Texas to DC and Vietnam, powerful, all-seeing forces with unlimited resources are determined to bury the truth about Sapphire Pavilion. But they have grossly underestimated Steve Stilwell and his associate Casey, a former Army pilot who lost her leg in a helo accident. And the ability to inspire loyalty wherever you go can come in handy when danger lurks behind every corner.

Book 2 of the Steve Stilwell Thriller series, which began with The Siegel Dispositions.