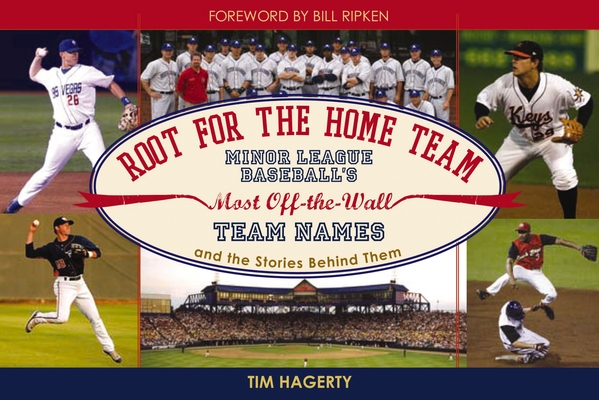 Root for the Home Team (Paperback)

Delve deep into to the grass roots of baseballs—the Minor League—and you’ll find Cannibals, Shoemakers, and Zephyrs! From the Coal Sox Nation to the Texarkana Casketmakers, Root for the Home Team brings you the most oddly original team names and the stories behind them.

Root for the Home Team includes profiles of more than 150 teams and lists of hundreds more—plus fun facts, action shots, and team logos. Impress your baseball buddies with your depth of knowledge!

Did you know?
The Altoona Curve were dubbed without ever throwing a breaking ball, thanks to local railroad history.
The Wichita Izzies had a fan so fanatical they named the team after him.
The Mudville Nine were named after the fictitious team in the poem “Casey at the Bat.”

Root for the Home Team is a unique book any baseball fan will love.

Tim Hagerty is a radio broadcaster with the Triple-A Portland Beavers in Portland, Oregon. He has also broadcasted games for the Idaho Falls Chukars and Mobile BayBears. Hagerty grew up in Canton, Massachusetts, a short drive or train ride from Fenway Park in Boston. Hagerty’s sports broadcasting work has received regional and national Edward. R. Murrow Awards. He has also been honored by the Society of Professional Journalists, Vermont Associated Press, Idaho State Broadcasters Association, and Alabama Associated Press. This is his first book.

Praise For Root for the Home Team: Minor League Baseball's Most Off-the-Wall Team Names and the Stories Behind Them…

"Root for the Home Team: Minor League Baseball's Most Off-the-Wall Team Names and the Stories Behind Them is a gem of a book that will make you love baseball more than you already do."
--Dirk Hayhurst Major League pitcher and New York Times bestselling author
or
Not Currently Available for Direct Purchase
Copyright © 2020 American Booksellers Association