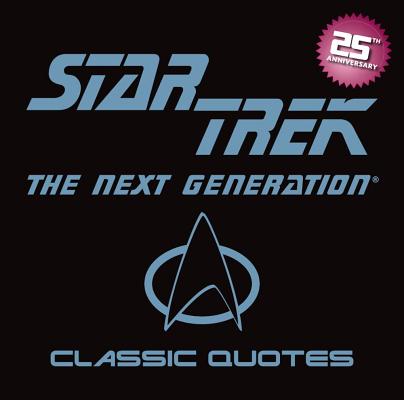 This 25th Anniversary Tie-In Edition celebrates the popular syndicated television show that aired from 1987 to 1994, as a new, larger crew explored strange worlds, sought out new life and new civilizations, and boldly went where no one had gone before. Featuring full-color photographs and quotes derived from all seven seasons.

These notable quotables from all seven seasons of The Next Generation and color photographs from the popular 1987-1994 television series are the perfect way to commemorate the 25th anniversary of the first episode.

There’s a lot of great material to pull from. In fact, Star Trek: The Next Generation won 18 Emmy Awards. The series formed the basis of the seventh through tenth Star Trek films.

Capt. Picard: Space... The final frontier. These are the voyages of the starship Enterprise. It's continuing mission, to explore strange new worlds. To seek out new life and new civilizations. To boldly go where no one has gone before.

William Riker: Flair is what marks the difference between artistry and mere competence.

Lt. Cmdr. Data: If the warp drive fails to activate, the results could be... unfortunate.
Lieutenant Worf: Very unfortunate. We will be dead.

Q: I’m not good in groups. It’s hard to work in groups when you're omnipotent.