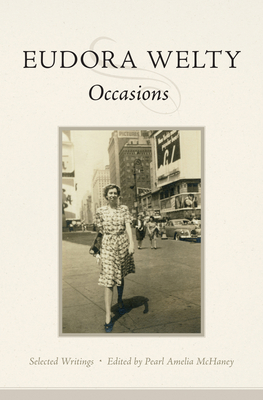 Occasions is a celebration of the short works of one of America's most beloved writers. To mark the centennial of Eudora Welty's birth, Pearl Amelia McHaney has collected more than sixty pieces by Welty (1909-2001) that are largely unknown and have not been reprinted since their first appearances in magazines, journals, newsletters, and newspapers. The gathering includes one of Welty's earliest stories, "Acrobats in the Park"; a self-analysis of her art printed in the Twenty Photographs portfolio; a recipe for Aunt Beck's Chicken Pie served up in the novel Losing Battles; and a parody of Edmund Wilson's scurrilous New Yorker review of one of William Faulkner's late novels. These occasional essays, tributes, stories, and comments will delight readers and reveal more of the genius of a favorite author deeply engaged with her people and their customs. In these pieces Welty put pen to paper for just causes: electing honorable officials, selling war bonds, promoting reading and the arts. Her sophistication and insight resonate in tributes to Isak Dinesen, Flannery O'Connor, and Walker Percy as well as in reviews of sculpture, painting, dance, and photography, and in her candid remarks about her Pulitzer Prize-winning novel, The Optimist's Daughter. Her sly humor emerges in "Women Make Turban in Own Home ," a delightful parody of projects suggested in Popular Mechanics. Written between the 1930s and the 1990s, these fictions, essays, commemorations, reviews, and salutes reveal the sparkling imagination of a celebrated writer who continues her hold on a wide audience through these newfound pleasures.