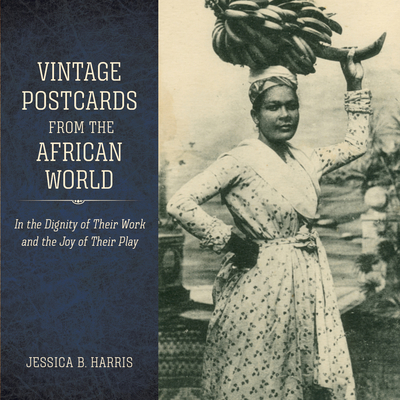 Vintage Postcards from the African World

For over forty years, professor and culinary historian Jessica B. Harris has collected postcards depicting Africans and their descendants in the American diaspora. They are presented for the first time in this exquisite volume. Vintage Postcards from the African World: In the Dignity of Their Work and the Joy of Their Play brings together more than 150 images, providing a visual document of more than a century of work in agricultural and culinary pursuits and joy in entertainments, parades, and celebrations. Organized by geography--Africa, the Caribbean, and the United States--as well as by the types of scenes depicted--the farm, the garden, and the sea; the marketplace; the vendors and the cooks; leisure, entertainments, and festivities--the images capture the dignity of the labors of everyday life and the pride of festive occasions. Superb and rare images demonstrate everything from how Africans and their descendants dressed to what tools they used to how their entertainments provided relief from toil. Three essays accompany the postcards, one of which details Harris's collection and the collecting process. A second presents suggestions on how to interpret the cards. A final essay gives brief information on the history of postcards and postcard dating and its increasing use and value to scholars.

Jessica B. Harris is author, editor, or translator of seventeen books, including twelve cookbooks documenting the foods and foodways of the African diaspora. She lectures and consults widely in the United States and abroad and has written extensively for scholarly and popular publications. Recently retired after five decades of teaching at Queens College, CUNY, Harris is the recipient of numerous awards for her work including an honorary doctorate of humane letters from Johnson and Wales University. She was recently inducted into the James Beard Cookbook Hall of Fame.
Loading...
or support indie stores by buying on