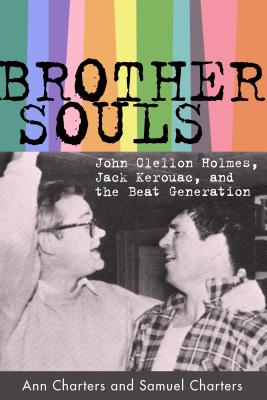 John Clellon Holmes met Jack Kerouac on a hot New York City weekend in 1948, and until the end of Kerouac's life they were--in Holmes's words--"Brother Souls." Both were neophyte novelists, hungry for literary fame but just as hungry to find a new way of responding to their experiences in a postwar American society that for them had lost its direction. Late one night as they sat talking, Kerouac spontaneously created the term "Beat Generation" to describe this new attitude they felt stirring around them. Brother Souls is the remarkable chronicle of this cornerstone friendship and the life of John Clellon Holmes. From 1948 to 1951, when Kerouac's wanderings took him back to New York, he and Holmes met almost daily. Struggling to find a form for the novel he intended to write, Kerouac climbed the stairs to the apartment in midtown Manhattan where Holmes lived with his wife to read the pages of Holmes's manuscript for the novel Go as they left the typewriter. With the pages of Holmes's final chapter still in his mind, he was at last able to crack his own writing dilemma. In a burst of creation in April 1951, he drew all the materials he had been gathering into the scroll manuscript of On the Road. Biographer Ann Charters was close to John Clellon Holmes for more than a decade. At his death in 1988 she was one of a handful of scholars allowed access to the voluminous archive of letters, journals, and manuscripts Holmes had been keeping for twenty-five years. In that mass of material waited an untold story. These two ambitious writers, Holmes and Kerouac, shared days and nights arguing over what writing should be, wandering from one explosive party to the next, and hanging on the new sounds of bebop. Through the pages of Holmes's journals, often written the morning after the events they recount, Charters discovered and mined an unparalleled trove describing the seminal figures of the Beat Generation: Holmes, Kerouac, Neal Cassady, Allen Ginsberg, William Burroughs, Gregory Corso, and their friends and lovers.

Ann Charters is professor emeritus of English at the University of Connecticut, where she taught for more than thirty years. She is the author and editor of numerous books on writers of the Beat Generation, including Beat Down to Your Soul: What Was the Beat Generation?, The Portable Beat Reader, and Kerouac: A Biography. Samuel Charters (1929-2015) was an eminent historian of jazz and blues music and author of the award-winning The Roots of the Blues and numerous other titles. He was also a Grammy-winning record producer, musician, poet, and fiction writer and was inducted into the Blues Hall of Fame in 1994.
or
Not Currently Available for Direct Purchase
Copyright © 2020 American Booksellers Association