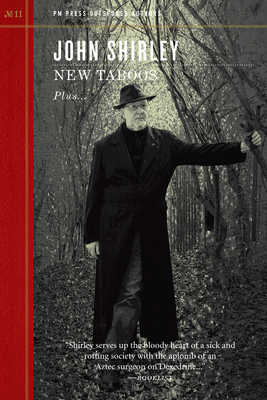 Mixing outlaw humor, sci-fi adventure, and cutting social criticism, this collection draws upon John Shirley’s entire arsenal. The title essay, "New Taboos" is his prescription for a radical revisioning of America. A new short story, "State of Imprisonment," is a horrifying and hilarious look at the privatization of the prison industry. The one percent gets their comeuppance in "Where the Market's Hottest." His TEDx address (delivered in Brussels in 2011) presents his proudly contrarian views of the next 40 years. Also featured is an Outspoken Interview showcasing the author's progressive sensibility, deep humanity, and mordant wit.

"Astonishingly consistent and rigorously horrifying. All his stories give off the chill of top-grade horror.”  —New York Times

"One of our best and most singular writers. A powerhouse of ideas and imagery."  —William Gibson

"Lyricist and “Dread Lord” of cyberpunk Shirley releases a full-throated howl about the twinned perils of corporate hegemony and citizen apathy... Brief but potent, the book is a treat for Shirley fans, and a reasonable starting point for newcomers." —Publishers Weekly

John Shirley is one of the original “Dread Lords” of Cyberpunk who brought a new noir sensibility to SF and Fantasy in the 1990s. He is the author of numerous books and many short stories, including the novels Bleak History, Crawlers, Demons, In Darkness Waiting, and the seminal cyberpunk works City Come A-Walkin' and A Song Called Youth trilogy of Eclipse, Eclipse Penumbra, and Eclipse Corona. His collections include the Bram Stoker and International Horror Guild Award–winning Black Butterflies, Living Shadows, and In Extremis. As a musician, he has fronted his own bands and written lyrics for Blue Öyster Cult and others. He lives in San Francisco.
Loading...
or support indie stores by buying on