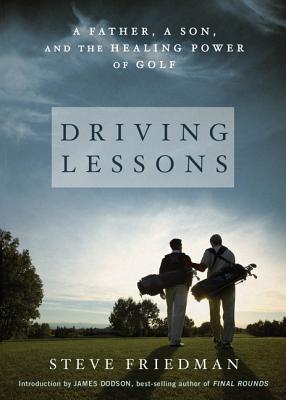 A Father, A Son, and the Healing Power of Golf

When Steve Friedman was a child growing up in the suburbs of St. Louis, the game of golf was, to him, mysterious and dark. His father's passion for it caused friction in his marriage and eluded the interest of his youngest son, who was devoted instead to basketball. For that and many other reasons, the two failed to bond, ultimately leading to an awkward and unhappy relationship.


But Friedman never forgot the love his father had for golf, and after many years, when he was in his
forties, he reached out and asked his dad to teach him the game. He thought that perhaps he could
learn something about his old man's view of life and thereby find a way to communicate with him.

This small volume is the sweet yet unsentimental story of that experience—the tale of two men using
the game of golf to find a way to connect with each other across decades of disagreement and misunderstanding. For anyone who is a golfer, a father, or a son, this book will be a treasure.

Praise For Driving Lessons: A Father, A Son, and the Healing Power of Golf…

“For generations, fathers and sons have trudged emerald fairways together in a lacerating enterprise called golf. Steve Friedman does a marvelous job writing about one such improbable outing, in which nine holes of spirited hacking bridged an aching gap between him and his dad. Driving Lessons is a good read about a good walk, unspoiled.” —Carl Hiaasen, author of The Downhill Lie: A Hacker's Return to a Ruinous Sport

“Steve Friedman may not be much of a golfer, but he's one heck of a writer. Rarely have the joys and sorrows of the father-son-putter dynamic been so keenly observed.” —Mark Adams, author of Mr. America

STEVE FRIEDMAN's stories have been published in The New York Times, The Washington Post, Esquire, GQ, The Best of Outside, The Bastard on the Couch, Modern Love, The Best American Travel Writing and, six times, The Best American Sports Writing. He is the author of The Gentleman's Guide to Life and co-author of The New York Times Best Seller, Loose Balls. A St. Louis native and graduate of Stanford University, Friedman lives in New York City, where he is Writer at Large for the Rodale Sports Group. He also teaches at Mediabistro.com.
Loading...
or
Not Currently Available for Direct Purchase