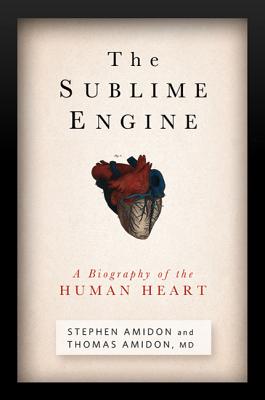 A Biography of the Human Heart

The heart has always captured the human imagination. It is the repository of our deepest religious and
artistic impulses, the organ whose steady functioning is understood, both literally and symbolically, as
the very life force itself. The Sublime Engine explores the profound sense of awe every person feels when they ponder the miracle encased within the ribs.

In this lyrical history, a critically acclaimed novelist and a leading cardiologist—who happen to be brothers— draw upon history, science, religion, popular culture, and literature to illuminate all of the heart's physical and figurative chambers. Divided into six sections, The Sublime Engine by Stephen Amidon and Thomas Amidon, MD traces the heart's sway over the human imagination from the time of the Egyptians and ancient Greece, through the Middle Ages and Renaissance, up to the modern era and beyond. More than just a work of scientific or cultural history, it is a biography of the single most important symbol of our humanity. Erudite, witty, and unexpected, The Sublime Engine makes the heart leap off the page.

Praise For The Sublime Engine: A Biography of the Human Heart…

“What a gem! Sparkling, multi-faceted, brilliant in every sense of the word.” —Joe McGinniss, author of Never Enough

“I cannot imagine a more enjoyable and informative, if not mesmerizing book, at once fascinating in detail and somehow larger than the sum of its parts. A biography of the heart is compelling because it isn't about the heart so much as it is about being human. And this condition is invoked and explored, made dramatic and compelling through an astonishing collection of historical details. A lovely book, moving, witty, and, of course, told with great heart.” —Craig Nova, author of The Informer and The Good Son

“No matter how much you think you know about the heart, you will be enlightened and entertained by this fascinating book. From its image as a religious icon and the seat of thoughts and feelings, we are led through the great discoveries of its function, its diseases, and its cures, including the most up-to-date therapies and promising clinical research.” —William Parmley, M.D., former Chief of Cardiology, UCSF, past president of the American College of Cardiology

Stephen Amidon is the author of six novels, including The New City and Human Capital. His fiction has been published in 15 countries, and he is a regular contributor of essays and criticism to newspapers and magazines in the United States and United Kingdom.

Thomas Amidon , MD, has been cardiology section chief at Overlake Hospital in Bellevue, WA, and a clinical instructor at Washington University. He is the author of dozens of articles and coauthor of the cardiology chapter in a topselling medical textbook.

The progression of the heart’s narrative in the book focuses largely on the discovery of medical and scientific facts about the cardiac muscle.  The authors, however, return time and time again to the heart as a metaphor for our most human qualities.  Which interpretation of the heart resonates most with you—the empirical or the emotional?  Which do you think the authors are ultimately driving at?

In Ancient Heart, the authors touch on the ‘heart-versus-head debate’, which they claim rages on to this day.  How has this dispute changed over time, and how has it stayed the same—particularly as it has moved from physical to metaphorical in nature?  How does the concept of right brain and left brain relate to this?

In Sacred Heart, the physical heart is deemed “the one indispensable corporeal item…{able to} stand in for the whole man.”  Why do you think this was?  Do you think that this idea holds true today in any sense?

Frankenstein is described as “a portrait of the heart’s endurance as a metaphor even as technology mystifies the body.” The authors point out that scientific exploration of the heart’s anatomical and physiological properties only drove artists and theologians to cement the heart’s metaphorical identity, ensuring the continuation of the human heart’s central paradox. What do you think drove artists, authors, poets, and theologians to stake a metaphorical claim on the heart just as it seemed science might truly explain it?

Consider this quote from Morbid Heart:  “Poe was very much aware of that the heart was no longer seen as solely the wellspring of love and life. It was also an agent of terrors that could be uncanny, even unspeakable.” How does Poe’s view of the heart compare to Plato’s theories on the division of the soul? How does each relate to its respective era’s knowledge of cardiology?

How do you think the book’s central theme of the heart being dichotomously metaphorical and empirical relates to the careers of the two authors?

What do you think the future holds for the human heart?  Will its journey towards immortality be thwarted by human weakness as the authors suggest?  Will all of the things it represents render the heart eternal or ephemeral?